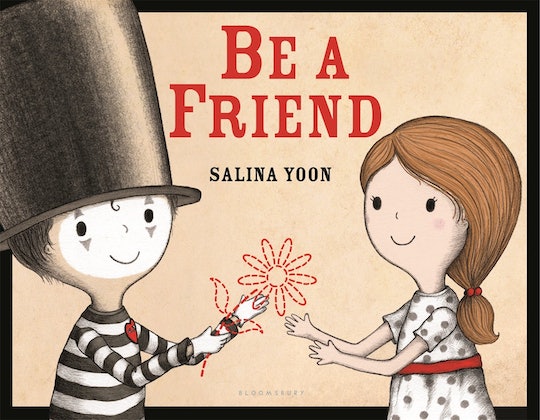 The Book That Captures My Daughter's Best Friendship

Admittedly, I get a little more emotional than most people about a good picture book, but there is one book that I read recently that had me drying my eyes repeatedly. The book is Be A Friend by Salina Yoon, and while I think any parent and child will appreciate the art and the underlying message of the story, it has a special meaning for my 4-year-old daughter and her best friendship.

I was instantly charmed by the main character, Dennis. He's a little boy who communicates in a unique way: he's a mime. He wears makeup and a costume. He doesn't talk. He is different from all the kids in his class. I love characters who march to their own beat. But the things that make Dennis so interesting and unique also make him feel apart. And feeling different is lonely.

But Dennis finds a friend. Joy catches the invisible ball that Dennis throws. Dennis and Joy don't need to talk to each other to understand each other or to have loads of fun. When I read this to my daughter, she loved the illustrations. The way Yoon draws Dennis's imagined objects with red dashed lines is fun. "You can see the invisible boat!" my daughter said. My daughter also really understood Dennis and Joy's friendship, because her best friend is deaf.

As my daughter has gotten older, she's more aware of her friend's deafness. She's learned to wave her hand if she wants her friend's attention.

My daughter and her best friend have a really special friendship. They are peas in a pod. As a parent, I get a lot of joy hearing my daughter totally lose herself in a fit of giggles. The girls have known each other for about a year and a half, since they were both newly 3. My daughter goes to a preschool program for deaf and hard-of-hearing students. She's hearing, but she is a "peer model." Along with learning all the normal preschool stuff — shapes and colors and how to sit during circle time — my daughter is learning cued speech, a modality of communication where you visually show the sounds you are making through hand shapes and positions. She and her best friend do cue with each other. But even when they don't, it doesn't stop them from having the best time together.

Like Dennis and Joy in Be A Friend, the girls laugh a lot. There's a lot of pointing. There's a lot of silly cueing (with their hands backwards or in positions that you don't use cueing). They hug each other. A lot. As my daughter has gotten older, she's more aware of her friend's deafness. She's learned to wave her hand if she wants her friend's attention. She knows that most of her friends wear some sort of hearing aid. She's learned that if she wants her friend to know what she's saying, she's going to have to cue.

There are also things about her friend that my daughter has never had to learn, because they are true of all children. My daughter and her friend want to have fun. They want friends. They want to laugh. They want to belong. They want to learn in school. They want just one more push on the swing. They are just like Dennis and Joy. They understand each other even when one of them doesn't speak.

Be A Friend captures all of this. It teaches you that some kids might just be a little different from you, but deep down, they all want to be understood. They want people to accept them for exactly who they are. Sure, my daughter and I got something extra out of the story, but I think everyone will relate to it.

One of the first things I did with my copy of Be A Friend was to share it with the mom of my daughter's best friend. I'm pretty sure she had to dry her eyes, too. There are a million ways kids communicate. Some talk. Some don't. Some cue or sign. Some are mimes. But they all want to have fun. And all parents want to hear those peals of unrestrained laughter.