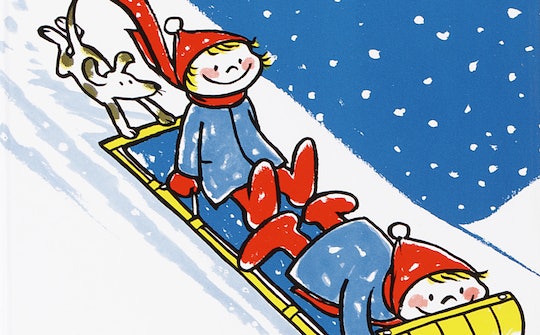 The Book That Captures The Childhood We Can’t Quite Reach

When my son was born, my mother brought over two quarts of frozen borscht, some hand-sewn swaddling blankets, and a TJ Maxx bag full of old books, which she had been dutifully saving for 30 years (the borscht, I assume, was an improvisation). The bag had all the hits: Dr Seuss’ One Fish Two Fish, Goodnight Moon, PJ Funnybunny. Among the sun-faded tomes was a book I’d almost forgotten, its spine cracked, cover peeling: Snow, by Roy McKie and P.D. Eastman.

The cover, for what it’s worth, is a graphic designer’s delight: each author gets their name written in his own kooky font, which is, of course, entirely different from the bold, outlined title: SNOW. Two cherubic children sled down a hill, red scarves whipping, their spotted dog yapping behind them. Their cheeks are rosy. Their hands are mittened. The snow is falling and they have no sense of fear, dread, or the passage of time. They are perfect.

I want to know

There is no middle ground when it comes to snow. You like snow. You love snow. What is snow? The kids don’t know. They don’t seem compelled to ask. Climatology books do not have enduring appeal among young readers. We’re in it for the whimsy.

The children sled. They ski. They wear matching hats. The sky is as dark as their jackets. They have a dog and make an igloo with a snow table. Sandwich is hard to rhyme so they eat bread and meat. They eat their meat snacks inside and feed the leftover bits to the birds.

The jaunty rhymes don’t quite compare to the classic zaniness of Dr. Seuss, but are still gleefully strange in their banality:

There’s a kind of depth to the color that feels saturated, like it could bleed right through you. It’s a soul-staining kind of blue.

So much of how I feel about this book is impossible to pin down in the actual text of the thing; my nostalgia is more a sensory experience than a distinct recollection of a plot or arc — it’s a body high. Childhood memories are like that. There is something about the color palette, the all-encompassing blue (Maggie Nelson would approve), the brilliant white, the jaunty red of their outerwear — there’s a kind of depth to the color that feels saturated, like it could bleed right through you. It’s a soul-staining kind of blue.

It is this ineffable magic that suffuses the snow, too, with all its glimmering possibilities: it is a surface, a vehicle for fun, can be molded into a domicile, into a man. Snow can be anything we want it to be; it is a conduit for our imagination, a matrix of childhood wonderment.

I’d never seen it before.

I grew up in San Francisco. Perpetually gray, snowless San Francisco. I had no reference point for this magical substance. Which, of course, only amplified its powers.

Did I beg my parents to take me to see the snow? No, I don’t think I ever did. I think I sensed that real snow could never possibly compare to this dreamland, with its streamlined color palette and flat surfaces. I didn’t want to sully the fantasy with dimension. I knew that snow was real, and that it wouldn’t be like the book.

The book culminates in the perfect way, an ending that is totally inevitable yet unpredictable.

They give him a hat and glasses and his own, identical red scarf. He is named Ned because it rhymes with head. The dog helps them build. But as soon as Ned’s head is attached, the whole endeavor meets an existential threat: the sun.

That sun! That sun!

It came out fast.

Do you think Ned

Is going to last?

The children, no longer grinning, frantically work to save Ned. One supports his limp body, the other shields it from the sun with a paltry black umbrella. With the turn of a page, Ned has been reduced to a puddle. The child holds the umbrella aloft, no longer angled toward the sun, and stands in a pile of Ned’s diminished remains.

But, here’s the thing: they do not accept the ephemerality of joy, do not shrug and tousle the snow from their scarves and run inside to their mother, content to eat a warm meal by the fire. No. They will they rage against the sun.

Take some! Save it

Take all you can

They ball up Ned’s remains and bring them inside, carefully tucking him into a corner of their freezer box. The snow out there might melt, but the children refuse to let that get them down. They want snow on demand, goddamnit, and they are going to save it for later.

And that’s it. That’s how it ends.

Even a child who has never seen snow knows it is no longer special once it’s been shoved next to the peas.

The children do not accept or acknowledge their inability to capture the magic; they do not come down from their high — they act as if nothing has changed. But we know better. Even a child who has never seen snow knows it is no longer special once it’s been shoved next to the peas. I felt sorry for these delusional children. Why couldn’t they just be happy with the snow when it was there? Why did they have to try to own it, to control it? Who were they kidding?

I still live in the Bay Area. There is no snow. I try reading the book to my son; he isn’t interested. I am an adult now with a child of my own, but the children and their spotted dog remain unchanged, still jazzed as ever about the snow.

Instead my son and I look at the sprinkler in the backyard when the afternoon light is hitting it, the way the water arcs over the milkweed and blueberry bushes, the way the scrub jays steal peanuts from the squirrels and the hummingbirds stop in midair to contemplate the flowers. The water sprays back and forth. The sun will set. The hose will turn off. There is no snow, and it is enough.