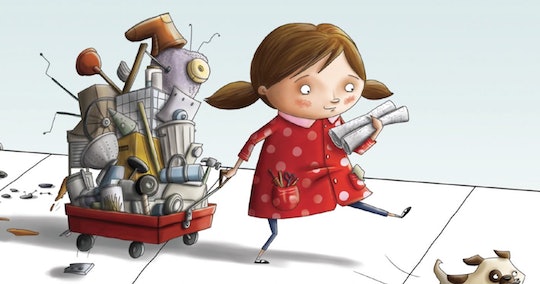 The Book That Cured Me & My Son Of Our Perfectionism

The first time my perfectionism hit was in middle school. I was sitting in the living room practicing my saxophone and struggling to hit the high notes. The rage and frustration rolled through my whole body. In a fury I flung my metal music stand all the way to the front hallway where it crashed with a familiar clanging sound. The poor thing was thrown daily. I gave up on the saxophone soon after. I decided I just wasn’t good enough.

With Harvey, it started with Hot Wheels. He couldn’t fit the tracks together the way he wanted to, causing him to scream with frustration. The orange blurs of Hot Wheels tracks would fly by my face from rooms away. Pretty soon he refused to even play unless his dad or I would set it all up for him. Of course, as any parent can tell you, Hot Wheels are super annoying to put together, so I didn’t immediately chalk these episodes to a larger issue. But at Harvey’s parent-teacher conference, we discovered the Hot Wheels were part of a larger pattern of perfectionism.

He couldn’t paint a portrait of his family because he couldn’t do it PERFECTLY. Despite loving to dance at home, he was too nervous to join in movement class in school because he might do it wrong.

Harvey, the teachers informed us, had a hard time trying anything new. “I don’t know how to do it,” he’d tell his them anytime he was even slightly out of his comfort zone. He couldn’t paint a portrait of his family because he couldn’t do it PERFECTLY. Despite loving to dance at home, he was too nervous to join in movement class in school because he might do it wrong.

When I found out about this similarity in our personalities, I felt helpless. How could I help my son with a problem that I still struggled with today? For both of us, the desire to create and play and enjoy life is there, but the fear of not being perfect holds us back.

Then one day I grabbed a picture book from the library, The Most Magnificent Thing by Ashley Spires. I didn’t even notice the plot, just that it had been recommended by a few kid-lit websites . The main character of the book was a “regular girl” who has many interests — but most of all loves to makes things. Then:

But, like so many creative endeavors, it isn’t “easy peasy.” The first thing she makes is not good. So is the second… third… fourth and even eleventh. And as her frustration builds, the girl in the book morphed into my son and me:

The angrier she gets, the faster she works. She SMASHES pieces into shapes. She JAMS parts together. She PUMMELS the little bits in.

CRUNCH! The PAIN starts in her finger. It rushes up to her BRAIN... and she EXPLODES!

That line hit me like a full-body gut punch. My whole life was filled with things I’d quit because I wasn’t immediately good: Playing saxophone; stand-up comedy; acting; knitting; playing video games in front of other people. Eventually I’d just stopped trying new things, exactly like Harvey seemed to be doing in school.

I turned the page in eager anticipation of how the perfectionist protagonist would overcome her emotional distress. At first it was nothing special: she takes a walk.

“Yeah, yeah,” I thought, “Harvey and I both have taken LOTS of walks. We’ve been told to calm down and take a breath and all that. It doesn’t work!”

But then the girl comes back (yes, a little calmer) and looks over her failed creations again.

The bad feeling are about to start all over again. Then she notices something surprising.

There are some parts of the WRONG things that are really quite RIGHT. The bolts on one, the shape of another, the wheel to seat ratio of the next. There are all sorts of parts that she likes!

By the time she reaches the end of the trail, she finally knows how to make the thing MAGNIFICENT.

By taking a step back the girl was able to clear away all the “not perfects” and the “not rights” and see her work for what it was: progress. In the end she confidently completes her project and while it’s not perfect, she’s proud of herself and declares it MAGNIFICENT.

Look, I read a lot of picture books. I don’t often close them and think “this has changed the way I will live my life.” But truly in 36 years it never occurred to me to look back at my “failures” and re-frame them as progress. The goal is progress, not perfection. I felt like a cage had been taken off of my heart. Would Harvey feel the same way?

Obviously, I would be absurd for me to claim that only a week later Harvey was setting up hot wheels all by himself without getting upset when it wasn’t perfect BUT THAT IS LITERALLY WHAT HAPPENED. But I can’t help but think that reading about how the girl in THE MOST MAGNIFICENT THING experienced the same frustrations he did — and then discovered that it’s not so bad to fail — must have affected Harvey in some way.

And at least when (or if!) either of us fall into the trap of perfectionism again, we can pull out The Most Magnificent Thing (because I totally bought a copy) and remember that perfect doesn’t exist, progress is all that matters, and that, yes, calming walks can be a good thing.