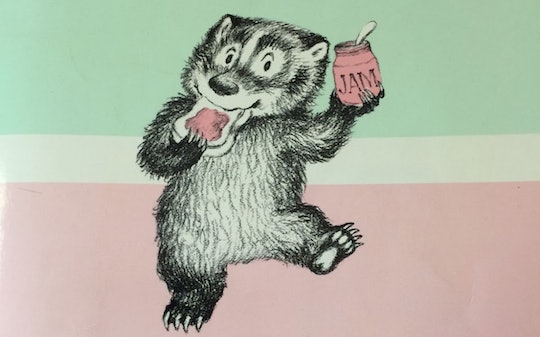 The Book That Saved Me At Bedtime With My Young Kids

Bedtime reading to my young children was a pleasure and a chore. One of their favorites was Pokey Little Puppy, which I found so slow, saccharine and tendentious, so flatly illustrated and dull, it made me want to tear my eyes out of my head. Their father loved reading Wind In the Willows aloud to them and I was happy to let him have it. Ernest H. Shepherd’s illustrations did help — badgers, moles, rats and stoats gamboled (and behaved like upper-class twits, with the occasional shenanigans by a doltish washerwoman) in pastoral, leisurely Edwardian England.

My girls loved everything about these books, and so did I. We all still do. Frances is drawn as a small badger, with a cute round black nose and a classic white streak down her face. She occasionally appears in a pink dress, often in just a blue wool scarf. (I don’t think this fools anyone. Frances is very clearly a little girl and her hairy badger disguise is irrelevant.)

Frances is also, apparently, English. For one thing, she has a taste for “jam,” which is not what we call it in America. In the dramedy, Bread and Jam for Frances, Frances, finally realizing that eating only bread-and-jam day after day is tedious and unsatisfying, has a proper lunch of lobster- salad sandwich, tomato soup, carrot sticks, celery, black olives, plums, cherries, and vanilla pudding, and to celebrate her embrace of culinary diversity, she sets a tiny vase of violets on her school desk, which seems to me charming and un-American. Also, she goes on “outings” and hankers for a tea set with the classic English Blue Willow pattern. But nevertheless, neither me or my girls found her foreign, or stuffy, or adorably odd. Frances was just like us — and not like us at our best, either.

Frances has agency. She wants things. Sometimes, she gets them. Sometimes, she changes her mind. But she wants things and adventures, and, except for when she eats a candy bar intended for Gloria as a birthday present, she feels neither shame nor guilt. (She does give Gloria the candy she hasn’t eaten and she does feel a little bad for having eating half of the candy but… she does it, surreptitiously and eagerly. We understand.) Frances is not as nice to Gloria as she should be but Gloria, like her sister, is unstoppable, and at the end of Best Friends for Frances, steps up and demonstrates her value and valor: “I can be a best friend and I can catch frogs, too.”

Frances has her better angels and her less-appealing-qualities. She’s stubborn. (It takes her mother two full days, and six meals, to get Frances off the bread-and-jam kick.)

Sisters that are much too small

To throw or catch or bat a ball

Are really not much good at all,

This one is not passive-aggressive. It’s just plain mean — sometimes Frances’ competitiveness, or desire to hang with her friends and dump Gloria, just get the better of her.

Frances can also be sly and manipulative. In A Bargain for Frances, the plot twists are as sophisticated as Henry James. Frances has been saving up for a nice china tea set. She has two dollars and 17 cents. Her friend, Thelma, about whom Frances’ mother has grave, and justifiable misgivings, has a tawdry plastic tea set. Thelma talks it up and claims that the blue china tea set is difficult if not impossible to get. Surely, says Iago-like Thelma, a good-enough plastic tea set in the hand is better than a blue china tea set, which you may never get.

Thelma says: “I know another girl who saved up for that tea set. Her mother went to every store and could not find one… She never got the tea set. This is what happens. A lot of girls never do get tea sets.” Frances pays up.

Bread and Jam for Frances by Russell Hoban, $3, Amazon

Bread and Jam for Frances by Russell Hoban, $3, Amazon

I still remember reading those two pages aloud and Caitlin and I both gasping in horror. Gloria, the voice of reason, remarks that the plastic tea set is crap, and furthermore, everyone — including Thelma — know that the blue china sets are available at the candy store. Frances then SEES Thelma buying the lovely blue china set with the money Frances has given her.

Frances then engages in a chilling, but admirable act of subterfuge. She puts a penny in the sugar bowl and lets Thelma know that there is money (perhaps a lot of money) in the sugar bowl. Thelma says that it’s her money and she wants it back. Frances points out that there are No Backsies. Thelma, greedy and foolish, offers her new blue china tea set — and also, as a sweetener, a dime. The exchange is made. Thelma sees that she has been tricked and that she should be wary of Frances. Frances is remarkably unapologetic. She suggests that having to be wary of one’s friends is not as much fun as being friends. “Do you want to be careful or do you want to be friends?” Like two old cons who have evened the score, they choose friendship, sharing the dime and jumping rope with Gloria.

It still takes my breath away.

Sometimes good, sometimes bad, sometimes canny, sometimes foolish, Frances is less posh and arty than Olivia and Eloise, and more everyday than either of them. Let me make not comparisons, because the world of children’s books is large and contains wonderful multitudes. Let me just say, Frances saved me, she brightened bedtime for more than a year and I love every naughty, nice and nuanced inch of her.