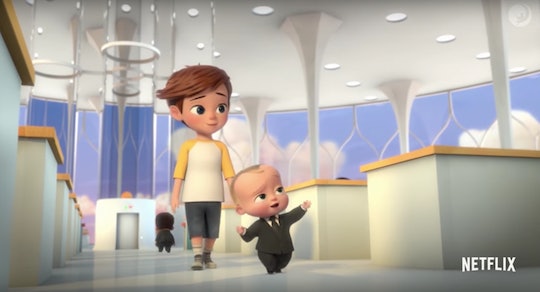 'The Boss Baby' Starts A Skirmish In This Exclusive Netflix Clip

The Boss Baby: Back in Business Season 2 is set to premiere on Netflix on Oct. 12, and grown ups and babies alike are so excited. In this exclusive look at the second installment of the series, the babies are hard at work dispatching some unwanted patrons from a local library. When The Boss Baby returns to Netflix, it delves into the battle between babies and old people.

This exclusive clip opens with one older gentleman calling for one of the babies, announcing that the library was now the turf of the "Consortium of Ancients." Though he can't see Staci, the little girl with the tufted ponytail, watching him from atop the bookshelves, she can see him. And she has a plan that she's about to set into motion to get him out of her hair. She chooses a book, gives an ominously adorable giggle, and then promptly drops it on his head so hard he lets out a loud yell. Since speaking above a whisper is against the rules of the library, he's escorted out. Point one: babies.

Then a gray-haired woman in a purple sweatsuit moseys down an aisle of books only to find another baby waiting for her. This kid is in an animal onesie, facing away from her like the creepiest of horror movie villains (if they ever had fuzzy green frog ears, that is).

As the shadows gather and the music becomes tense, the woman hears a giggle behind her. She turns to discover another little one waiting with their back to her, also in an animal onesie. When she spins around again to see the first baby, they're gone. The other has also vanished. Her nerves becoming increasingly frazzled, the woman turns one more time to find a third animal-clad kiddo watching her from amongst the books on a shelf. "Maaamaaa," the third triplet breathes, which causes the woman to let out a blood-curdling scream. The security guard takes her out for breaking the rules, too.

But the babies' work is far from done. They have two more targets to remove before the library is theirs. The first is another woman, this time in an orange sweatsuit, who comes upon the Boss Baby himself, Ted, and Jimbo messily drinking milk from their bottles and getting it all over the carpet. When she tries to alert the librarian, Ted's older brother Tim keeps her busy with basic questions about book genres. Meanwhile, the babies make the woman so furious that her shout of rage also gets her kicked out. (Though the security guard apologies to his meemaw for doing so.)

The babies have met their match with the "big Kahuna," however. They skulk around the library trying to take down another old man with very editorial eyebrows, but their every attempt is foiled. When they try to wallop him with with a book or two to get him thrown out for yelling, Ted and Staci's tomes come up against the man's steel buttock implants. All is lost until Ted and Staci give the old man a wet willy, causing him to scream and get thrown out.

It seems the babies win the library at the end of the day, though figuring out why this turf war is happening in the first place will have to wait until the series premiere.