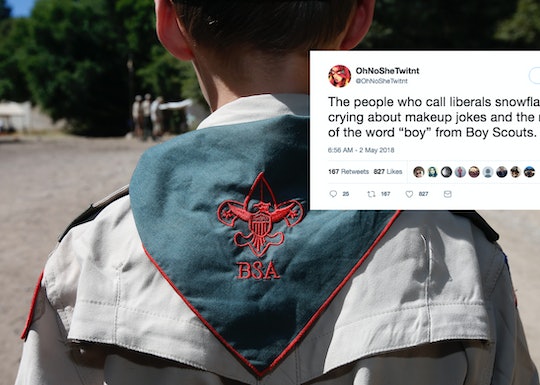 The Boy Scouts Are Removing "Boy" From Their Name, & People Are So Divided On It

Just seven months after the Boy Scouts of America made the decision to allow girls into its organization, the club announced another controversial change on Wednesday. Effective starting February 2019, the Boy Scouts will remove "boy" from its name. And, as one might expect, people can't seem to agree on the organization's new direction.

Stephen Medlicott, the national marketing group director of Boy Scouts of America, sparked a major debate on Wednesday when he announced the name change in an official statement. Boy Scouts of America's older youth program will now be called "Scouts BSA," according to CNN, a modification Medlicott plans to promote with a marketing campaign called "Scout Me In." "Cub Scouts is a lot of fun, and now it's available to all kids," Medlicott said about the organization's new vision, according to Yahoo. "That's why we love 'Scout Me In' — because it speaks to girls and boys and tells them, 'This is for you. We want you to join!'"

Michael Surbaugh, the Chief Scout Executive of the Boy Scouts of America echoed Medlicott's sentiment in an additional statement. Surbaugh explained, according to NPR:

As we enter a new era for our organization, it is important that all youth can see themselves in Scouting in every way possible. That is why it is important that the name for our Scouting program for older youth remain consistent with the single name approach used for the Cub Scouts. Starting in February 2019, the name of the older youth program will be 'Scouts BSA,' and the name of our iconic organization will continue to be Boy Scouts of America.

Of course, many people are divided about the organization dropping "boy" from its name. On one hand, some people think critics of the decision are overreacting.

As for the opposing side of the argument, many people believe the change is some sort of scheme to "do away with masculinity."

It goes without saying that this debate is a very layered one. The argument first kicked off in October 2017 when the Boy Scouts decided to allow girls into its organization. Although the decision was supposedly made to accommodate busy families wanting to consolidate after school care, others saw it as an attack on the Girl Scouts of the USA. For starters, Girl Scouts President Kathy Hopinkah Hannan accused the Boy Scouts of trying to recruit girls to boost its enrollment numbers, according to BuzzFeed News. Others argued that the move to be more inclusive was a little too late, and even disingenuous.

Proponents of the change, however, reasoned that it would give girls the opportunity to earn Eagle Scout status — a prestigious distinction that is more widely recognized than the Girl Scout's Gold Award.

As for what's different about Wednesday's argument, it seems there's a lot more talk about what this means for "masculinity." "The war on boys and men continue," one person on Twitter penned. "It looks like we have reached the end of the road with the Boy Scouts. The organization has decided to drop “boys” from its name. The war on masculinity continues. There are no places for boys or men to escape the scourge called feminism."

Of course, the war on men argument is a common battle cry for people who confuse equality with oppression. And it's important to note that Girl Scouts was established in 1912 as a response to there being no "places" for girls to learn about fellowship and the outdoors. Women creating spaces for themselves is not an attack on men. Creating inclusive environments is not a war against so-called family values.

On the topic of spaces, some see the Boy Scout's name change as a move to create a friendly environment for non-gender conforming scouts. For those kids who don't feel comfortable with identifying as a "girl" or a "boy," the moniker Scouts BSA seems to alleviate this problem. "USA finally making scouting gender neutral, like welcome to the rest of the world it took you a while huh," one supporter wrote. "Boy Scouts is a stupid concept I'm happy it's gone!!

And from a business perspective, it seems like this change just makes sense. Following the move to allow girls into the program, it would be a bit strange if the Boy Scouts didn't modify its moniker.

All that being said, it's highly likely this name change will be a hot-button issue for some time to come.