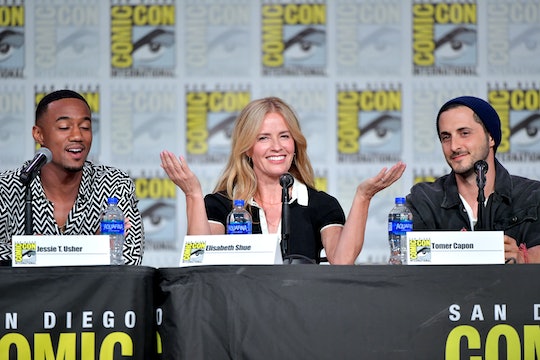 Superheroes have certainly been having their day in the sun in recent years. But are some viewers tiring of the supersaturated color palette and simple stories of good fighting evil? Amazon Prime is betting on that to be true with a complex new series releasing July 26 called The Boys. It's still about superheroes, but this time they're anything but super-humans — they're very flawed people, with some having the potential to be downright evil. The Boys' superheroes promise to turn the genre on it's head with an edgy, much more violent take on what happens when superheroes aren't all they're cracked up to be.

The show is produced by Seth Rogen and Eric Kripke, creator of the wildly popular Supernatural, and stars a large cast that is split into two factions: “the boys” and “the superheroes.” It’s based on a comic series by Garth Ennis and Darick Robertson and delves into a world where superheroes have the popularity of celebrities and the personal morality of dirty politicians. The titular boys are a group of vigilantes who set out to take down the corrupt superheroes and expose Vought, the organization that backs them.

As for the cast, it's chock full of familiar faces. Karl Urban, Jack Quaid, Laz Alonso, Tomer Capon and Karen Fukuhara star as The Boys. Chace Crawford, Erin Moriarty, Antony Starr, and Jessie T. Usher are on the superhero side. Then there's Elisabeth Shue, who stars in a role that was originally written as a man in the comic — the head of Vought, the shady organization behind the heroes.

Deadline examined the way that women are making their mark in such a male-dominated series, including Shue and Fukahara, who plays The Female, the lone XX chromosome member of The Boys. When asked about her character she commented, “It’s really exciting ripping people’s eyes open.”

Moriarty commented on what drew her to the role of superhero Starlight, a strong-hearted woman from Midwest America who is at war with her own moral center. “I’m tired of the young ingenue role. We have been oversaturated by that," she commented, adding that when she first read the script she was pleasantly surprised to find her role more complex and nuanced than many female superheroes we’ve seen. For season two, Aya Cash was announced for the role of Stormfront, another character that was originally written as a man in the comics.

As exciting as it is to see women taking center stage in the world of superheroes, there’s no doubt this series will be full of testosterone and blood. The instigating action is a scene in which Hughie, played by Quaid, is walking with his girlfriend when she is run through (yes, run through) by a superhero with super speed. Hughie is left holding the only thing left of his girlfriend: her severed hands.

During the panel for the show at San Diego Comic Con, Collier commented that there is a moment when a superhero smashes a guy’s head in during a particularly graphic round of sex. So, as panel moderator, Aisha Tyler emphasized this is not a show for wee ones or weak stomachs. This is the kind of show you watch once the littles are fast asleep... or away for the evening.

In one particularly bold review of the show, The Boys was noted as being “so nihilistic and cruel that it’s either unbearable, or the perfect show for the current era we’re in…It is void of hope and void of heart. But that’s also the point," according to SlashFilm.

So if you're interested in a new take on the superhero genre, look for The Boys dropping on Amazon Prime on July 26, 2019.