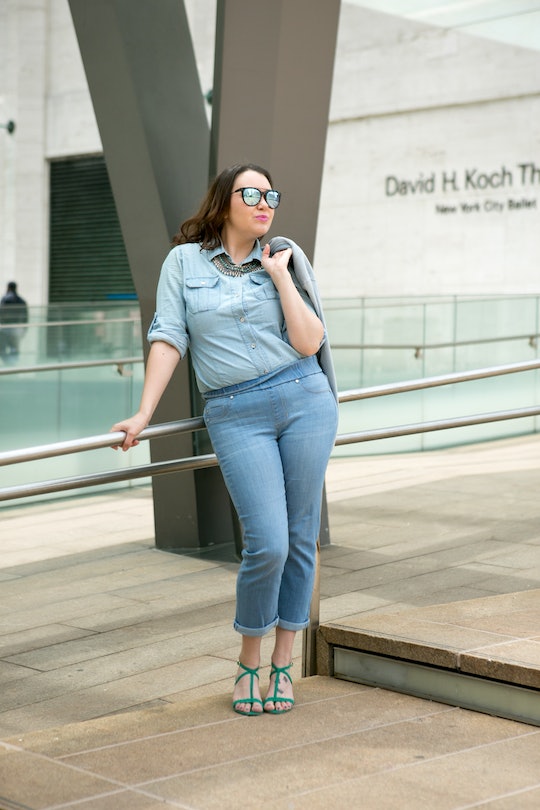 The Bra That Saved Me Postpartum

I had my second child last August. After a month of trying with all my might to breastfeed, I finally realized it wasn’t working out. So I became a formula-feeding mom. But even though I had stopped breastfeeding, I quickly became addicted to wearing the comfortable nursing bras I had purchased in anticipation of nursing. Still, after a few months, I finally went on the prowl to find a great non-nursing bra. When I put it on for the first time, I quickly realized that it was the bra that would save me postpartum, because it helped me feel sexy at a time when that felt impossible.

At first, I didn't want to part with my nursing bras. But once my daughter turned 6 months old, my husband kept telling me to “get rid of the effing nursing bras and buy some new bras already.” He was ready to see his wife in some sexy lingerie, and I don't blame him, because I was starting to feel the same way, too. I just needed a little push in the right direction.

The bra was the Bra-lellujah Full Coverage Bra ($70), and it was made by Spanx. Yes, the same SPANX known for the shapewear that sucks and tucks everything into place sold me the bra that changed the way I think about underwear. For real.

My love affair with this bra started on Facebook. No, seriously. It was the first and only time that I got suckered in by one of those sponsored ads that constantly pop up in your newsfeed. Big Brother must have been watching me like a hawk and knew that I was on the market for an awesome bra, so bra ads were plastered all over my newsfeed.

I clicked on the ad that showed me the Spanx bra. The website claimed that it offered full coverage and would smooth out my back fat. That sounded just heavenly. It almost seemed to good to be true, so I wanted to check it out in person before adding to my cart.

The next day after spinning class, I walked into Bloomingdale’s because I had read they had a SPANX shop in their lingerie department. When I got to their section, I started rummaging through to see if they had these special, limited edition bras sitting out somewhere, but they were nowhere to be found. (I'm not really sure why they are labeled "limited edition," as they've been available for quite some time now.) When I finally got the salesperson's attention, I frantically pulled out my phone and googled the bra to show her exactly what I was looking for. She had never heard of it. My heart sunk.

The first time I felt the bra against my skin, I started to feel like myself again, not just some woman who just had a baby and was desperately trying to pull herself together every day.

“Okay, calm down.” I told myself. Honestly, though, I could feel the disappointment swelling up inside me. I’m not sure if it's because I spend so much time these days shopping for diapers and formula, but I was really excited about having this bra in my hands. I felt like a kid begging for a toy at store. So I went home and ordered it online, and this bra and I have been inseparable ever since the day it arrived.

There are many reasons why this bra is so special to me. It felt great to put something on that didn’t have any nursing straps, which would always come unclipped. The first time I felt the bra against my skin, I started to feel like myself again, not just some woman who just had a baby and was desperately trying to pull herself together every day. I loved that it gave my sagging boobs a little lift. It even came with a red heart on the strap to signify the “uplifing patch.”

The bra's “back-smoothing style" takes it to a whole new level. Having recently had a baby, my muscles aren’t as toned or strong as they used to be, and covering my back fat is a daily struggle. But this bra makes it all better. It doesn’t hide everything completely, but the back strap is thicker than your normal strap, allowing for more roll coverage.

When you’ve just had a baby and you’re just not quite feeling back to your normal self, adding a great wardrobe staple can be the one thing to pull you out of your funk. That's what this bra did for me.

And then, of course, there’s the fact that I can wear the bra underneath a shirt without an extra layer in between. In years past, I almost always wore a camisole underneath everything to smooth my body out. But I can wear just this bra and only this bra under my shirt and feel great about myself. And at only $70, it really costs the same as any other designer bra, so it didn't break the bank. I'm pretty sure the "limited edition" aspect is just a market ploy, but they also might just be selling until it's not available anymore, as they sizes in stock are really picked over.

When you’ve just had a baby and you’re just not quite feeling back to your normal self, adding a great wardrobe staple can be the one thing to pull you out of your funk. That's what this bra did for me. (Plus, my husband loved the new addition to my wardrobe.) After a few weeks, I officially tossed all of my nursing bras. It felt awesome. Mommy got her groove back after all.