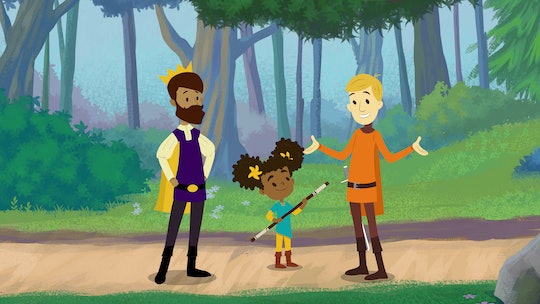 The children's book The Bravest Knight Who Ever Lived, written by Daniel Errico, begins like any other fairytale. A young knight must battle a dragon to rescue a prince and princess. But instead of marrying the beautiful princess in the end, the knight chooses to marry the prince. Since then, Errico has transformed the book into a children's show on Hulu, The Bravest Knight. In a phone interview for Romper, Errico tells me why having an LGBTQ protagonist is so important, why kids need to see it, and how the show got made (it involves Donna Murphy rolling around a studio).

I should probably be more surprised than I am when he tells me that most networks he approached with this story were resistant to having an LGBTQ protagonist. "They said that they could privately support it, but not publicly because the market wouldn't accept it or there'd be protests," Errico says. After all, the kids' show Arthur had a single episode where a minor character had one gay wedding and people flipped out. Alabama Public Television even refused to air it. So a whole show with a happy gay family up front and center? Sacre bleu!

Luckily, Hulu understood what Errico was about and gave the show the green light. Errico stresses the importance of the LGBTQ characters being the protagonists on The Bravest Knight. There are plenty of LGBTQ supporting characters on screen, but so few who are the star of the show — and that's the kind of thing that kids will pick up on. One gay rat wedding isn't enough to solve homophobia or teach kids tolerance after all.

Representation is such a buzzy word — but the fact is it truly matters. Take Errico's description of one letter he received after writing the children's book. It was from a 50-year-old man who had just come out to his mother two years earlier. "He told me that he needed a story like this when he was growing up in order to not feel broken," Errico says. "To know that people have been struggling for so long and that it’s a problem that we could’ve been helping with for so long."

There are a lot of aspects of The Bravest Knight that are adorable and sweet and wonderful and I must credit much of that to Errico himself, who in addition to being the story's creator, also served as Executive Producer and writer on the show, meaning he was involved in every aspect of its creation. There is also matter of the incredible cast who provide the voices for the the characters.

Stars of the show include T.R. Knight, RuPaul, Wanda Sykes, and Christine Baranksi, just to name a few. Bobby Moynihan, who plays Cedric's sidekick, a troll named Grunt, Errico says constantly cracks him up. "I've consistently just been so in disbelief that he's our troll," he says. Another highlight, Errico tells me, was having Donna Murphy in the studio for one episode as an evil witch. "And if there’s ever any doubt that she was giving it her all, which there wasn’t, she got down on the floor when there’s this scene when she gets mud balls thrown at her, and she needs to kind of cry out in desperation," he says. "She just started writhing on the floor and rolling around and it was the greatest."

But this show isn't really about Donna Murphy and it's not really about exposing kids to depictions of happy LGBTQ families — though that is certainly part of it. Errico tells me he wants to change the conversation about what it means to be brave, what it means to be a parent, and even what traditional masculinity looks like. And those are lessons every kid (and grown up) could use.