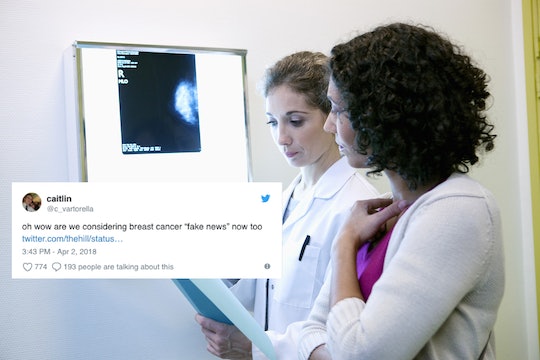 The Department of Health and Human Service's (HHS) Office on Women's Health (OWH) has removed the breast cancer page from its website, WomensHealth.gov. The page previously offered information about screening and treatment under the Affordable Care Act, as well as breast cancer statistics and symptoms. Though a spokesperson cited the reason for the scrub as a lack of use and efficiency, many are still outraged and are positing that the true intent was to cover up certain benefits available through the ACA.

A spokesperson for the organization told ThinkProgress the page was removed on Dec. 6, 2017 and was not reinstated because the content was "not mobile-friendly and very rarely used." They continued: “Before we update any of the information… we engage in a comprehensive audit and use analysis process that includes reviewing other federal consumer health websites to ensure we are not duplicating efforts or presenting redundant information.”

They went onto say that users can still go to WomensHealth.gov/cancer for information on insurance and treatment, and that despite there not being a different sanction for breast cancer, there are still other sources that offer that information in a "much more user-friendly format." It should also be noted that HHS did not announce that it was removing the page, and has not commented on why it didn't just make its page more "user-friendly."

The report goes onto note that the following information is no longer available through the site:

People on social media have been voicing their concerns about the scrub, citing that they are not convinced the reason was inefficient technology. "The [Dept] of Health and Human Services' (HHS) Office on Women's Health has just removed webpages related to Breast cancer & ways to receive free or low cost screening via the Affordable Care Act. It appears that in an effort to hurt Obamacare, they are covering up it's benefits," wrote one user. "Oh wow are we considering breast cancer 'fake news' now too," wrote another.

Despite the justifications, it seems suspicious at best that an inefficient website would be enough of a reason to remove such pivotal information from a government-sanctioned web source. However, if some of the more sinister motives are to be believed, it does make sense: the information previously provided on the site informs low-income individuals that the ACA is required to cover genetic testing for breast cancer, and if they are positive for BRCA1 or BRCA2 (the gene associated with the disease), insurers are also required to cover all or a portion of a preventative double mastectomy, for example.

It would not be outlandish to assume that there is more at play here than the spokesperson claims. Just a week ago (March 23) NBC reported that the page devoted to information on lesbian and bisexual health was also removed from the site, with no warning or explanation. And as for the idea that these pages aren't well-trafficked? That's false, too. One report found that the removed pages were generating about 700,000 clicks in the month before they were removed. That's just under one million people who were searching the site for health-related information.

Though it is true that there are other sources where you can find important information relating to your health and ACA coverage, there's really no excuse as to why the information would ever be removed from a government page. The existence of it could only stand to help those who need it most, but perhaps hinder the agenda of those with different motives.