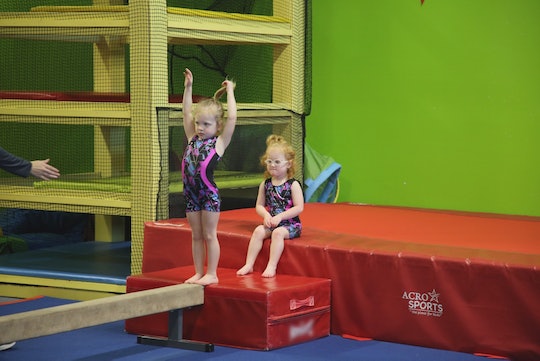 If You're In Need Of Something Cute, Watch The Busby Quints Do Yoga

The Busby quintuplets have gotten up to all manner of adorable adventures on TLC's OutDaughtered. Fans have watched them play and learn, celebrate holidays and sneak snacks with Uncle Dale. But they're about to level up the cute in this exclusive clip from Season 5, which airs every Tuesday on TLC. When you see the Busby quints do yoga on OutDaughtered, you're not going to believe just how precious it is.

The clip opens with Danielle and Adam leading their girls (all five quints plus older sister Blayke) into the yoga studio where they'll be having their very first family yoga session. In a quick cut to the confessional, Danielle explains that they've been helping one of the girls, Parker, work through her anxiety lately with the help of an occupational therapist. The O.T. recommended trying yoga to help with Parker's relaxation and confidence, but Danielle and Adam thought it might help all their children. In fact, the whole family gets in on the fun, because Uncle Dale and Aunt Crystal arrive shortly, too.

"Though this is for Parker, we really think that all the kids could benefit from some focus," Danielle says. The girls are game, but it takes a little while for everyone to get into Yoga Mode.

Each one of the Busbys is arrayed on their own yoga mat while the instructor Cristina tells them to take a deep breath. The first move proves to be a problem right away. Cristina directs the class to lift up one leg while in a seated position and hold it like a baby. Dale and Adam struggle with a lack of flexibility (can relate), but the kids are utterly confounded. Despite encouragement from all the adults on hand, the quints seem to think someone is playing a trick here. Hold their leg like a baby and rock it? What kind of grownup nonsense is this?

Adam worries that the class is perhaps slightly advanced for three-year-olds, but Parker takes to yoga relatively quickly. She's the first of the quints to adopt the leg pose, and she cycles through all the rest of them with ease. She does bridges, downward dogs, upward-facing dogs, all of it. I half-expected her to step to the front of the room and start teaching the class. She's a total natural, which impresses her parents, as well as her aunt.

Adam dubs Parker the M.V.P. of the class, while Danielle and Crystal are surprised (and pleased) by the fact that she's landing every move. "Usually when Parker will do something new, she wants her sisters to do it first," Danielle says in the confessional. "But this time Parker took the lead, which was pretty cool to see."

The rest of the girls follow. They tackle star poses and turn themselves into trees. They crawl around the studio and try out new stretches. It seems like kid yoga was a success for the Busbys, giving them the focus and relaxation Danielle hoped it would. And it doesn't hurt that it was super cute to watch, too.