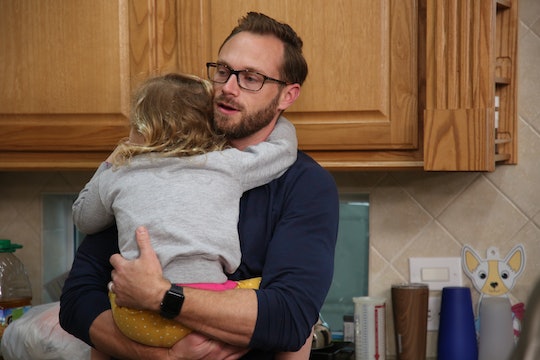 It's Pure Chaos During The Busby Quints' First Sleepover On 'OutDaughtered'

Every Tuesday on TLC, Adam and Danielle Busby deal with being OutDaughtered by all six of their little ones. In this exclusive clip from an upcoming episode, they enlist additional forces and still find themselves overwhelmed. That's because the Busby quints' first sleepover on OutDaughtered is going to be a hectic situation no matter how many hands are on deck.

The clip opens with a cascade of small children emerging from the family car with sleeping bags in hand. As it turns out, there's a mold issue in the Busby homestead, so they'll have to stay with Aunt Crystal and Uncle Dale until it gets sorted out. It sounds like a simple solution, but the reality is a lot more complicated. In a confessional, Danielle expresses some trepidation over the temporary relocation. "I'm a little bit worried about the quints, because they're so hard to handle these days," she says. "But right now, they're really just excited about a sleepover, so [I'm] gonna stay optimistic."

Dale's stress levels are on high from the minute the army of toddlers arrives. He is alarmed by the amount of stuff the Busbys have brought with them, as well as how long they'll be staying. He was under the impression this was just for one night. It is not.

Danielle gets it. She knows it's a huge undertaking to have eight Busbys in their house when they're certainly not used to having that many around normally. Dale is already worried about having enough food to feed everyone, but that's not the only dilemma to emerge. When Crystal tries to get the kids onto the couch, she is met with screeching refusals and the crashing of lamps. All of the children are crawling all over each other in an indistinguishable mass. "I'm already stressed out," Dale concludes.

Dale thinks Crystal is being a little unrealistic about how the sleepover is going to go. She's staying as positive as her sister Danielle, but Dale doesn't expect this to be all rainbows and smiles. "They're dangerous when they're together, honestly," he says. The Busbys may be worried about how they'll get through this, but it's starting to seem like Dale might be the first one to crack under the pressure.

While Crystal desperately tries to fit all four thousand sleeping bags into the guest space, Danielle mentally prepares for the shenanigans that will soon be afoot. Her plan is to get the kids into their jammies and prepare them for bed in the hopes that they'll be so tuckered out they go right to sleep. Dale immediately undermines this by sneaking candy with Hazel and his son. When Crystal finds out, she is appalled. Sugar at bedtime? No, ma'am!

Your first sleepover is a special time where you learn about how uncomfortable it is to sleep on the floor, as well as how thrilling it is to create a ruckus long after bedtime. It seems like the Busby quints make the most of that experience, though fans will have to check out the whole episode to see if the grownups manage to have just as much fun.