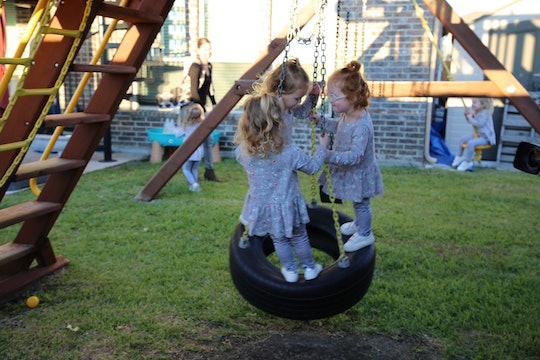 The Busby Quints Get Artistic In This Exclusive 'OutDaughtered' Clip

In previous seasons of TLC's OutDaughtered, Danielle Busby showed her support for the hospital that helped her out after the birth of her quintuplets. Raising funds for the Neonatal Intensive Care Unit (NICU) has taken different forms over the years, but in Season 5, Danielle gets creative. In this exclusive clip, the Busby quints raise money for the NICU by designing t-shirts for charity with their mom.

OutDaughtered airs every Tuesday on TLC, though "There's No Place Like Home" is the Season 4 finale. New episodes will premiere in the fall. Until then, the Busbys are embracing their more charitable inclinations. When the clip opens, the quintuplets are arranged on the carpet with paper and markers, each and every one drawing their own distinct picture. "I recently got into making t-shirts, really just as a hobby," Danielle explains in the confessional. Since the quints loved drawing, she thought they would love creating images that they could then wear on their clothes.

The girls display some adorable politeness while trading markers and offering thanks, which Danielle commends them on. It actually perfectly suits the charitable situation, though on a much smaller scale. What starts in saying "thank you" ends in raising funds for a good cause.

"Every year, I like to do something to raise money for the NICU," Danielle continues, again in the confessional. "And last year, we did a charity ride at the studio, but since we don't have that anymore, I had to come up with a new idea to give back." She thinks it's important to support the NICU because of how much help they can provide, though she acknowledges that there just isn't enough to go around. Her plan is to sell the shirts that the quints design online and then give all the proceeds to the NICU.

"It's kind of just a special moment, just seeing them just draw this, knowing that maybe this can be something that could benefit or do something good for another family," Danielle concluded. The clip finishes out shortly after with a brief glimpse at some of the girls' drawings. While Danielle does something on the computer, Hazel demands that she take a look at the back of one drawing, holding it out and waving it around in frustration when Danielle does not immediately give it her undivided attention.

Danielle looks up with a smile moments later to see Hazel's drawing, which appears to be a large green shape with some green lines and then another concentrated smudge of green in the middle. Danielle asks if it's a rainstorm, but Hazel corrects her that it's actually a monster. Danielle thinks it might be hard to reproduce on a t-shirt. Another of the girls presents her own monster drawing to Danielle, with more fanfare. Danielle loves the other "ice monster" and thinks it would make a great shirt. Perhaps fans can look forward to a whole line of monster shirts, since it seems to be a popular choice.

Having the quints help raise money for the NICU that gave them so much assistance really shows how far the Busby family has come in a few short years.

Editor's note: an earlier version of this article stated this was the Season 5 finale when it is the Season 4 finale. It has been corrected.