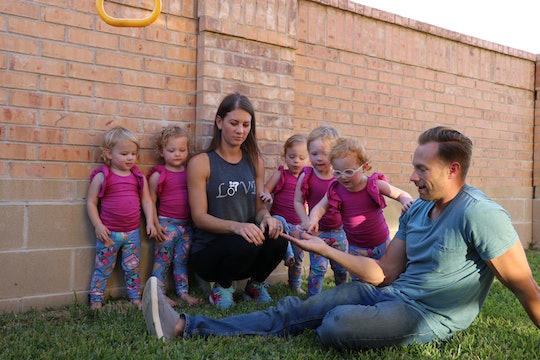 The Busbys Go To Hawaii In This Exclusive 'OutDaughtered' Clip

The fourth season of OutDaughtered has been an eventful one for the Busbys. They weathered milestones big and small with the quintuplets, handled unexpected holiday obstacles, and made sure to spend time with their older daughter Blayke. Now the Season 4 finale will see the family take a much-needed vacation that unfortunately doesn't quite go to plan. But before trouble arises, the Busby quintuplets learn to hula dance in this exclusive OutDaughtered clip. And it's simply too adorable to miss.

OutDaughtered airs Tuesdays on TLC at 8:00 p.m. Eastern Time. In "Hawaii Five-Uh-Oh," Adam and Danielle take the whole family to Hawaii: Blayke, Ava, Parker, Riley, Hazel, Ava, and Olivia, as well as Uncle Dale and Aunt Crystal. But while they try to unwind, it proves difficult with five fussy toddlers. The clip opens with everyone arriving in time for a hula lesson, surrounded by stunning views and laden with flowers. "This is how you start a Hawaii vacation," Danielle announces. "Hula dance lessons!"

Adam is ready to go, to Danielle's amusement, so they all line up in front of their instructor Aunty Tutu. Her dance advice comes in the form of a fruit metaphor: you have to make sure your hips hit imaginary pineapples, papayas, and coconuts, culminating in a hip-circling fruit salad.

But Aunt Crystal is the only one who won't get scurvy. Issues arise before the lesson even begins, because the quints refuse to get dressed up for the occasion in grass skirts, though they do have many a floral headband adorning their heads. "The quints are just super tired today, trying to catch up on Hawaii time for jet lag," Danielle explains in this episode's particularly picturesque confessional. But she believes having an activity and keeping them occupied will be beneficial. At the very least, it should keep them awake.

The quints are low on patience, however. Parker does not find Adam's coconut bikini top humorous. Hazel does not want to sing Danielle a happy birthday, or allow Dale to put her down. In fact, he has to carry her in his arms for the duration of the lesson. Adam thinks the little girls are handling travel well, all things considered, but that's before the lesson actually kicks off.

Once it does, the quints are having none of it. There are a few feeble attempts to hit pineapples or papayas, but for the most part only the older children and Aunt Crystal are having fun dancing it out. And while Adam tries his best, he isn't able to get every ingredient of the fruit salad, describing his version as more of a "straight-laced salad."

Dale tries to set Hazel down but she's totally done, according to Danielle. Dale has to take her aside for some juice, which seems to inspire the rest of the quints. Soon enough, they're following Hazel off the dance floor for some juice of their own. Danielle knows they're jet lagged, but she can only hope that they start to feel better soon instead of feeling worse.

It may not be the most idea way to begin a vacation, but there's always the possibility that things will look up before Season 4 comes to an end.