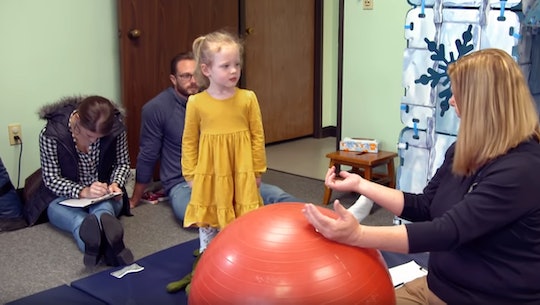 With six daughters — including their adorable all-girl quintuplets — Adam and Danielle Busby sure have their hands full. As documented in their TLC reality series Outdaughtered, the couple is very attentive to each and everyone of their kids, especially Parker, who is the shyest one of the quints. In this exclusive clip for the upcoming episode of Outdaughtered, Parker sees a doctor about her anxiety, and her parents are right there by her side.

In last week’s episode, during a Christmas performance in which the quints take the stage to sing “Jingle Bells,” Parker breaks out into tears. While the rest of her sisters sing and jingle along with the bells on their wrist, Parker initially stands quietly in the corner. But midway through the song, she begins to get upset, and eventually starts crying.

“It’s heartbreaking to see Parker crying on stage,” Adam says in the episode. “I just want to run up there and hold her. It just seems like all the girls are taking this huge step forward, and Parker’s just going the other direction. I’m just worried that his may be more than just stage fright.”

In this exclusive preview for Jul. 16 episode, Adam and Danielle take Parker to get evaluated by Dr. Susan, an occupational therapist. “I’m glad that we’re taking this step and I’m hoping that we just come away with it with a better understanding of how we can help her,” says Adam. As Danielle brushes Parker’s hair, she tells her that she’ll be going to see a new doctor who’ll be asking her some questions. She comforts Parker by telling her that she and Adam will be with her the whole time.

“You know, this appointment is for us as well,” Adam admits. “Well, Danielle and I have sort of been on opposite sides of this. So it will be good to see someone so that they can guide us through it.” Upon entering the doctor’s office (which looks more like an awesome playroom than an office), Susan introduces herself to Parker, who is reluctant to shake her hand.

“Parker hates new things and being in the spotlight, and here we are dropping her into this situation where it’s all about her,” Danielle narrates over the clip. “It kind of feels backwards.”

Susan explains that she’s an occupational therapist whose goal is to help kids participate in life and play, because that’s one of the ways they can develop and grow. Danielle tells the Susan that at times, Parker can be completely fine, but then she’ll start “freaking out and crying” randomly. The doctor tells Danielle that through therapy, they’re going to try and figure out why it happens.

As she plays with Parker, Susan notices how reserved the little girls is. “Parker is sweet,” she explains. “You can tell she is shy. When I would ask her questions, she really didn’t respond. She would look towards her parents. I was trying to get her to play, and get her comfortable, so I could see what’s going on with her and why she was shutting down.”

Anxiety is not an easy issue for anyone to handle, let alone a child. But hopefully, with the help of her new therapist and the love and support she has from her parents, Parker will open up and talk about her feelings, and eventually learn to manage and overcome the fear she experiences.