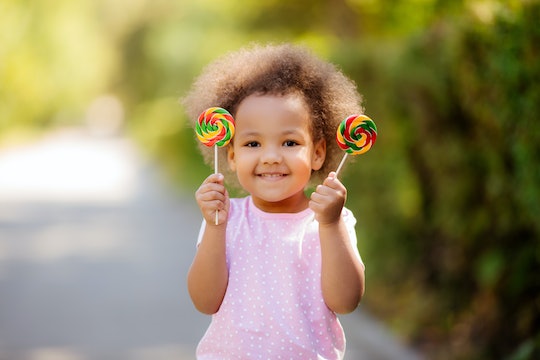 The Candy Challenge Is Taking Over Social Media, But Is It Harmful For Kids?

If you've been on Instagram or Facebook recently, you've probably seen parents doing the "candy challenge." Parents put a bowl of candy in front of their toddler and walk away, telling the little one not to touch it until they come back. But is the candy challenge funny or harmful?

This is not the first candy-involved challenge on the internet. For several years, there's been a popular viral challenge where parents tell children that they ate all of their Halloween candy to see their children's reaction. The children are obviously devastated, and many break down in tears, confused as to why their parents would do such a thing (and probably wondering why their parents were recording it). This seems tame in comparison. After all, the kids do eventually get the candy, and there doesn't seem to be any trust violated. Cheyenne Carter, assistant teaching professor at Wake Forest University's Online Master’s in Counseling program tells Romper that those who want to try it out are definitely not harming their kids. The candy challenge "is not a trauma-inducing activity."

Jerk move? It might feel like that to some of us (particularly those of us with a sweet tooth), but traumatic? Not so much. Carter says that it actually... might be a good thing? "The skills tested by the adult are self-restraint and delayed gratification, two crucial life skills that adults do need to help children learn." Like, maybe if my parents didn't have a sugar free-for-all at our house all the time, with no restrictions, I would perhaps not feel the need to have Hershey's Kisses in every room of my home. (Or maybe not.)

That's not to say there's zero risk for emotional trauma — quite the opposite. It's all a matter of intention, notes Carter. "The harm that can come from these 'experiments' with children is housed more in the parent having unrealistic expectations of the child’s developmental level, using shame as a response if the child ate the candy, or having a lack of empathy in using this form of entertainment to taunt, tease, or ridicule the child." Children's development is not fodder for likes, nor should we treat it as such. Sharing with a few friends on text message is one thing. Making a produced video for social is another.

Lakiesha Russell, a licensed professional counselor, agrees that the candy challenge has the capacity to help as well as harm. "We live in a microwave generation where people and kids want things instantly and not have to work towards that goal or thing they want and expect it to be handed to them, with no work being put towards achieving that," she tells Romper. The skills learned by the candy challenge help to combat that. She cautions that while the actual challenge might be beneficial, it's important for parents to praise their children afterwards, letting them know that their success is noted and they did a great job.

However, she finds that the real issue of the candy challenge is that you're recording it for viewer entertainment, making your child's potential learning lesson a spectacle, rather than personal. "Parents must also be mindful as well to not set the child up to look for approval from the outside world, and pushing the need to be perfect on their child because the world is watching with the recording," Russell says. Most of the time, the kids in these challenges are too young to understand they're being shown off in their efforts. While it might seem harmless, it's important for us as parents to consider their privacy, and how it might affect them later on. That, it seems, is the real crux that we are missing when we're participating in the candy challenge.

More Like This
From Captions To Gifts, These Are All The Kindergarten Graduation Ideas You Need
26 Toddler Lunch Ideas They’ll Actually Be Excited To Eat
34 Instagram Captions Perfect For Preschool Graduation Photos
Here’s What You Need To Know About That Viral 1960s Baby Formula “Recipe”