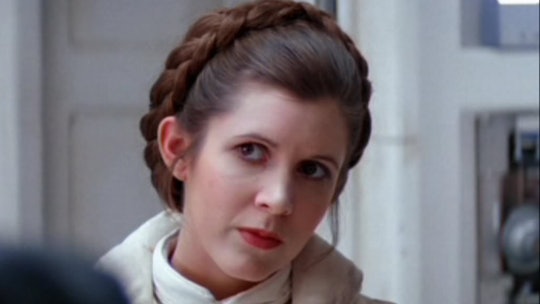 It has been almost a year after Carrie Fisher's death, and one of the actress's final films is about to premiere. Star Wars: The Last Jedi, marks one of the final appearances on the big screen — and the final appearance in a Star Wars film — the icon will play, and throughout The Last Jedi, that imminent absence is felt. The Last Jedi pays tribute to Carrie Fisher in all the right ways, hopefully making fans of the iconic player in the Star Wars world feel the princess was given the appropriate goodbye.

Warning: This post contains spoilers from Star Wars: The Last Jedi. Continue at the risk of learning plot points from the latest film.

In December of 2016, Carrie Fisher was rushed to the hospital in Los Angeles following a "cardiac episode" as Rolling Stone puts it, on a flight. What followed was devastating. Four days following the flight episode, Fisher died. The cause of death was difficult to determine, though cardiac reasons were considered to be a contributing fact. Later, a full report revealed that Fisher, who suffered from drug addiction and mental illness in her life, also had traces of drugs in her system, though the time at which she had taken them was indeterminable.

The next day, Fisher's famous mother, Debbie Reynolds of Singing in the Rain, The Unsinkable Molly Brown, and a millennial's favorite, Halloweentown, suffered from a stroke while allegedly planning funeral arrangements for her daughter. She was rushed to the hospital, but also died shortly after that afternoon.

Almost a year later, Fisher is remembered in multiple ways throughout The Last Jedi. The most distinct tribute for Fisher is the memory card at the end of the film. Fisher is featured very prominently in the film, which is incredible and heartbreaking at the same time, so to see the film topped off with a quote card that touches on the huge role she played in the franchise feels right. The quote card says,

In loving memory of our Princess ... Carrie Fisher

Another important moment in the film is a callback to a scene with Princess Leia from the original trilogy. Luke brings forth a hologram of Princess Leia at one point and while it could easily be something built into the script from the very beginning, the moment feels like a true dedication to the woman who has been involved in such an important and popular franchise.

Fisher's daughter, Billie Lourd, who plays Lieutenant Connix in the franchise (she premiered her character in Star Wars: The Force Awakens) has continued to dedicate moments of her Star Wars experience to her late mother. For example, at the Last Jedi premiere, Lourd wore Leia's iconic hairdo.

Months prior to the premiere, Lourd also wore a dress inspired by Leia's white outfit from the films to the Star Wars Celebration that brought together fans to celebrate 40 years of Star Wars.

Mark Hamill, Fisher's costar throughout the franchise's growth, has explained just how hard it is to be without Fisher during such an important moment in the franchise's history. Hamill told Mashable, "She's irreplaceable. She made my life so much more fun. I'll never stop loving her. I'll never stop missing her, but I know that she would want us to be happy. She really would."

While fans probably agree with Hamill, Leia and Fisher are irreplaceable, there is no doubt that Star Wars found the perfect way to remember her and honor her memory in The Last Jedi.