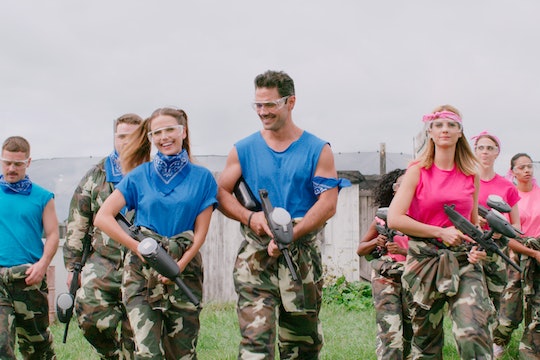 Hallmark Channel is currently in the middle of its Countdown to Summer lineup and the cast of From Friend To Fiancé may look familiar to Hallmark Channel Original Movie super fans. Jocelyn Hudon, Ryan Paevey, and Kelly Kruger star as the TV movie's central love triangle and they're no strangers to soapy plot twists.

Hudon plays Jess Parks, a successful 30-something career woman with great friends and a cool apartment in a bustling city. But when she visits her suburban hometown, she learns her childhood best friend Ted Cooper (played by Paevey) is marrying her high school nemesis Kimberly Kentwood (played by Kruger). And even though Jess disapproves of the union, she finds herself stuck planning the wedding when Ted asks her to be his Best Woman. Jess is left to navigate the romantic feelings she realizes have been there all along, while weighing whether to reveal them and derail her best friend's wedding, or keep them to herself and miss out on a relationship years in the making.

This is Hudon's first Hallmark Channel Original Movie, per her iMDB page, but she is slated to appear in another one premiering later this year called Eat, Drink, and Be Married. She also did three episodes on this season of When Calls the Heart, a Hallmark Channel period drama about a western mining town. But Hudson has plenty of credits outside the network under her belt, too. She's appeared on episodes of Guillermo del Toro's FX horror series The Strain, Netflix's pro soccer drama 21 Thunder, its supernatural series The Order, and CBS's Criminal Minds.

Paevey and Kruger, meanwhile, both come from the soap opera world. Paevey starred as General Hospital's Detective Nathan West for five years, before making a name for himself as a Hallmark Channel Original Movie romantic lead. From Friend to Fiancé is his fifth TV movie with the network in three years, according to the his iMDB page, having previously played the titular roles in Unleashing Mr. Darcy and its sequel Marrying Mr. Darcy. He also starred in last year's Hope at Christmas and 2017's Harvest Love.

Kruger appeared on The Young and The Restless from 2002-2003, before defecting to The Bold and the Beautiful from 2014-2017, and then returned to Y&R in 2018. This year, it was announced that she'd been pre-nominated for her first Daytime Emmy, according to a Hallmark Channel press release. She's snagged guest roles on primetime series, as well, including Entourage, Imposters, and The Bold Type.

Paevey explained in an interview with Soaps in Depth that having a background in daytime soap was actually super helpful for making Hallmark Channel Original Movies, because both formats have a lot of dialogue and long shoot days. "But it’s good to work with soap peeps like Kelly because we’re used to that," he said. "It frees you up to just have a good time on set because everybody’s relaxed."

Added Paevey of his co-stars, "It was super weird — the three of us were like old friends from day one."

You can see how well the trio manages playing enemies when From Friend To Fiancé premieres May 25.