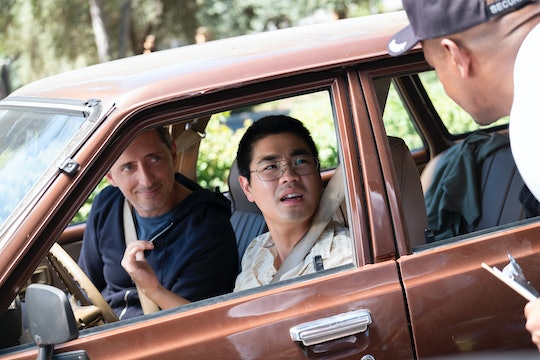 Netflix’s new comedy, Huge In France, tells the semi-autobiographical story of Gad Elmaleh, a French comedian who moved to Los Angeles to reconnect with his family and reinvent his life. Elmaleh is often referred to as the “Jerry Seinfeld of France,” so you can expect him deliver big laughs. But the rest of the cast of Huge In France is just as funny, and they may look familiar to some viewers.

In the series, Elmaleh plays himself — a popular French stand-up comic who comes to America and realizes he doesn't get the same perks of fame and stardom he enjoys at home. When talking to The Hollywood Reporter, the 47-year-old revealed that he is a huge celebrity in France — he has sold-out shows and shares a son with the Princess of Monaco — but when he comes to LA, he doesn’t get recognized at all. "When I'm here, I'm totally unknown," Elmaleh told the outlet. "I have to answer the question, 'So what do you do?' — You have to face yourself. It's really humbling."

In an interview with Frenchly, Elmaleh explained how he wanted Huge In France to be about family and his own experiences as father. “It’s about a father who wants to reconnect with his son, culture shock, co-parenting with an ex, starting comedy, and dating — [which is] very difficult for me in the US, it was easy in France,” he said “The most difficult part of this whole challenge is that I miss my family — Even in the sexiest and most fun city, when I miss my little boy, I feel stupid. I’m his dad and I’m not there. But, c’est comme ça, c’est la vie.”

While Huge In France is loosely based on Elmaleh’s life, some aspects of his family are fictionalized. For example, Elmaleh’s real-life ex is European princess, but on the show, she’s a woman from LA named Vivian, played by Emmy-nominated actress Erinn Hayes. Hayes may look familiar to some viewers because she’s been on a number of popular series over the years, including Children’s Hospital, Guys With Kids, Kevin Can Wait, New Girl, and Parks and Recreation.

But, of all the familiar faces you may see in Huge In France, the most notable one will probably be Jerry Seinfeld, who makes a hilarious cameo as himself in one of the first episodes of the series.

Huge In France premieres with its eight-episode first season on Friday, Apr. 12 on Netflix.