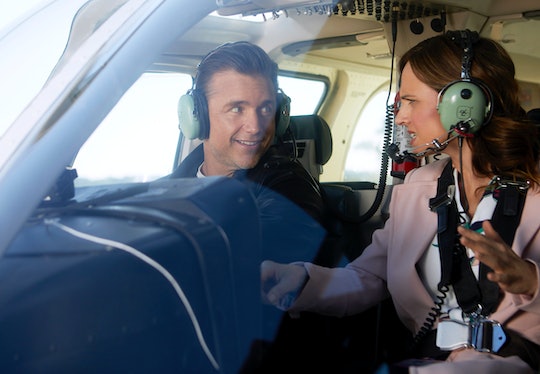 Sometimes, the best way to spend a lazy weekend is to settle in with a good romantic movie. Luckily, Hallmark is airing their brand new film, Love Takes Flight, on Apr. 26, which means you’ll have something fun to watch on this cozy Saturday night. You may find some familiar faces in the cast of Love Takes Flight, so here’s a breakdown of the actors and which shows and movies you may recognize them from.

The characters at the heart of the romance in Love Takes Flight are hospital COO Dr. Lizzie Beauman, played by actress Nikki DeLoach, and ex-military pilot Charley Allen, portrayed by actor Jeff Hephner. If DeLoach looks familiar, it’s probably because she’s been in a number of popular TV shows and movies over the years. The actress is most known for her role on the Mickey Mouse Club, which she starred in at the age of 12, alongside a young Justin Timberlake, Britney Spears, Ryan Gosling, and Christina Aguilera.

DeLoach also had guest spots on shows like Mad Men, CSI, Criminal Minds, and Cold Case. But if you’re a Hallmark movie aficionado, you may remember her from the network’s original movies, The Perfect Catch, Christmas Land, A Dream of Christmas, and Truly, Madly, Sweetly.

When talking to Parade, DeLoach talked about the true story that drew her to the role of Lizzie in Love Takes Flight, and she mentioned how honored she is to be in a film that is being released as part of Hallmark’s Hall of Fame. “I had already heard of the story that inspired this movie,” she said. “It was so beautiful and worthy of people’s attention. So, to be a small part of that was a big YES for me. Secondly, to have the opportunity to be a part of a Hallmark Hall of Fame movie is something I would never pass up. It is a real honor.”

Hephner, who plays DeLoach’s love interest, Charley, is best known for his recurring role as Jeff Clarke on NBC’s dramas, Chicago Med and Chicago Fire. He’s starred in the second season of Ron Howard’s Nat Geo series, Mars, and was a regular on the Starz series, Boss with Kelsey Grammer. Hephner was recently seen in Peppermint opposite Jennifer Garner, and was featured in Christopher Nolan’s Interstellar in 2014.

The story of Love Takes Flight is a sweet one. It centers around Lizzie and Charley’s love for their family, and the connection they develop while trying to help others. With such stellar cast and charming story line, the film is the perfect spring weekend watch.