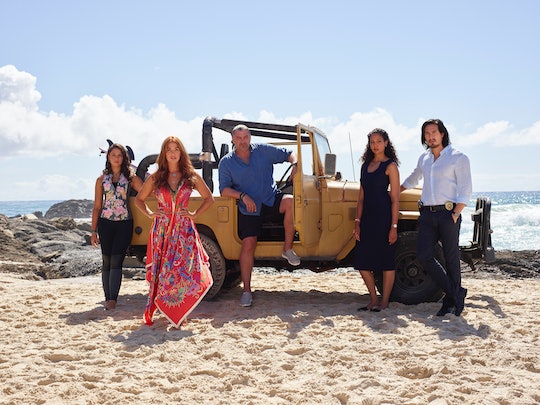 If you're in need of a new crime drama, you're in luck: Reef Break premieres on ABC on Jun. 20 with all the intrigue and beach locales you could want from a procedural. The trailer features a coterie of familiar faces, but in case you can't place them, you might be wondering who's in the cast of Reef Break.

Poppy Montgomery stars as Cat Chambers, an ex-thief who is now walking the semi-straight and narrow as a fixer for the governor of her Pacific Island home, the Reef. She was away for several years but now she's back, and she's got an eye for crime. She also surfs! And has complicated relationships that are sure to get even more complex as the show progresses. There's her ex-husband Jake Elliot, played by Ray Stevenson, who is a former FBI agent, as well as her new love interest Detective Wyatt Cole (Desmond Chiam). Melissa Bonne co-stars as Ana Dumont, while Tamala Shelton appears as Petra.

All of the actors in the main cast have quite extensive TV resumes, so even if you don't recognize them at first glance, there's a good chance you've seen them somewhere before. It's just a question of where.

Montgomery is a procedural pro, having previously been a cast member on Without a Trace and Unforgettable. Interspersed with those longer-running roles were countless TV movies. She played Marilyn Monroe for CBS back in a 2001 adaptation of Joyce Carol Oates' Blonde, but more recently played J.K. Rowling in Magic Beyond Words: The J.K. Rowling story. She also starred in Signed, Sealed, Delivered: From Paris with Love, A Surrogate's Nightmare, and Mission Control.

Stevenson, meanwhile, might be best known for playing Blackbeard on Black Sails. But he was also in the mini-series Rellik, as well as the shows Medici and Dexter. In recent years, he popped up in the films Final Score, Accident Man, and Thor: Ragnarok. Chiam is balancing multiple TV projects at the moment: in addition to Reef Break, he's on Now Apocalypse as Jethro and We Were Tomorrow as Kuo. He'll be in the upcoming movie The Chronicles of Anatta: Mark of Existence, but you might have seen him on The Shannara Chronicles, too.

Bonne was in the family-friendly soccer film Back of the Net in 2019, and the TV series Harrow for one episode. Before that, she appeared on Pulse, Home and Away, and Janet King. She also wrote, produced, and directed two short films called iBerry and Guardian Elf. Shelton has been in the shows Nowhere Boys, Cleverman, and Location Scouts, though she has some movies in the works, too. She'll be in the short film Scout and the feature films Dark Place and Occupation Rainfall.

The cast of Reef Break may contain several actors you've seen before, especially if you're well-versed in crime dramas and Australian TV. But even if you're familiar with their work, you'll be meeting them anew in this ABC series and getting to know them as whole new characters.