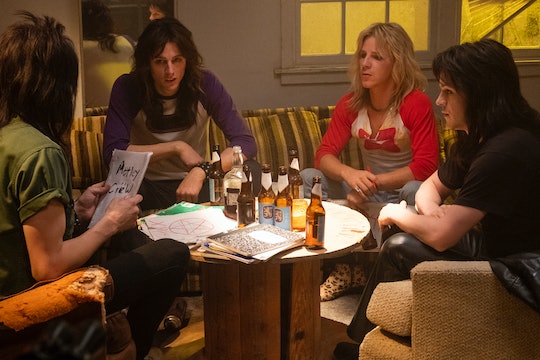 After the wild success of Bohemian Rhapsody, the world is getting another rock music biopic. Netflix’s new film, The Dirt, tells the story of Mötley Crüe — one of the biggest heavy metal band’s of the ‘80s. The original band members — which include Nikki Sixx, Tommy Lee, Mick Mars, and Vince Neil — have huge personalities, which is perfectly portrayed by the intensely talented cast of The Dirt.

The movie is based on the band’s 2001 autobiography The Dirt: Confessions of the World's Most Notorious Rock Band, which highlights their rise to stardom, including graphic details of all the sex and drugs they met along the way. With director Jeff Tremaine (Jackass) at the helm, the film puts Mötley Crüe’s stories of addiction, excess, and international stardom on screen.

The Dirt cast is chock full of notable names, including rapper Machine Gun Kelly who stars as Tommy Lee in the film. Welsh actor, Iwan Rheon — who is known for his role as Ramsay Bolton on HBO’s hit series Game of Thrones — plays Mötley Crüe guitarist Mick Mars, and British actor, Douglas Booth takes on the role of the band’s founder Nikki Sixx. The band’s lead singer, Vince Neil, is portrayed by Australian actor Daniel Webber, who viewers may recognize from his role as Lewis Wilson on Netflix’s Marvel series The Punisher, or from his portrayal of Lee Harvey Oswald on Hulu’s 11/22/63.

Similar to Bohemian Rhapsody, The Dirt features a cast of immensely talented actors, but the movie has a distinctly different tone. In an interview with Uproxx, Tremaine explained that he didn’t want to water down the band’s low points — which include stories of misogyny and domestic abuse — so it took him a long time to find the right formula to make the biopic.

“Almost every aspect of it took a long time,” said the director. “Casting took a really long time. Getting the story straight took a long time. We’ve had a lot of iterations between when I started and now of the script. It’s been a long, bumpy, crazy road.” He added that while a film like Bohemian Rhapsody tells a cleaner version of a rock band’s story, The Dirt is darker and more graphic, so it may not be suitable to watch with your kids.

The Dirt exposes some pretty debaucherous tales about Mötley Crüe, but Tremaine told Uproxx that the band was completely on board with telling their story, “warts and all.” With such an amazing cast lined up, this biopic should do Mötley Crüe, and their dirt, justice.

The Dirt premieres on Friday, Mar. 22 on Netflix.