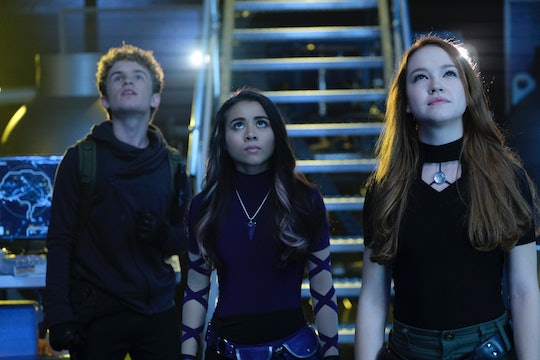 The 'Kim Possible' Remake Looks Almost As Adorable As Its Stars

When Kim Possible first started airing on Disney Channel in the mid-oughts I was immediately obsessed with Kim's big red hair, her cargo pants, and her general bad-ass attitude. Now, many years later, the beloved show (like so many) is getting a reboot — a Disney Channel Original Movie Kim Possible starring three newcomers Romper was lucky enough to chat with: Sadie Stanley, Sean Giambrone, and Ciara Riley Wilson as Kim Possible, Ron Stoppable, and new character Athena, respectively. The three teen stars were beyond jazzed to reboot the beloved show — and show off newfound martial art and improv skills.

The trio explains to me that for a lot of the movie they were asked to improvise. Only they don't call it improvise — referring to the scenes as "kung fu takes," because that is what directors Zach Lipovsky and Adam B. Stein always called them. "It kind of gets you back into the scene and makes it feel more real," Stanley explains. "It was a really really fun way to get through scenes. I really appreciated that Adam and Zach did that because it was so much fun. Sometimes those takes where the best ones and we'd come up with really funny stuff."

It's easy to see how improv banter would work between these three. They are constantly bouncing off of one another, finishing each other's sentences and effusively praising each other's skills, whether it's Riley Wilson's ability to cry on-demand or Giambrone's knack for physical comedy. "The energy between us is really nice, that we are able to say whatever and be funny and its relatable," Riley-Wilson says. It's so funny.

Stanley relates one off-the-cuff moment that still makes all three of them giggle:

There's this scene when Sean and I were running into the classroom...the teacher is really interesting. He has this picture of his cat that's back at home, he really loves his cat. He's purring and rubbing his face on the glass of the picture frame, and it's weird. We're supposed to be reacting to it and Sean just goes, "Stop."

Riley-Wilson agrees, "I don't know why that made me laugh so hard but it really did. I watched it back and I was crying it was so funny. I don't know why I found it so funny. It was just a genuine reaction of him being like, 'ewww.'"

All three agree that their more experienced costars are masters at "kung-fu takes." On Patton Oswalt, who plays Professor Dementor, the three gush that he was "so funny" and "really witty and quick." Stanley says that some of the funniest takes were by Taylor Ortega and Todd Stashwick who play Shego and Drakken. "They are improve kings and queens. They are amazing at it and they bounce off each other so well, the banter between them is so organic and fun," she says.

When asked what their favorite part of filming the movie is, Stanley says she never knows how to answer because the whole experiences was like summer camp. But it's clear that all three of them were very excited about their stunts. While most of the exciting stunts go to Stanley and Riley-Wilson who do most of the fighting, Giambrone says he did get to "fly around in a jet pack" and take some hit training, both experiences he says were lots of fun.

While of course the actors had "amazing" stunt actors to do the really dangerous stuff, they still got in plenty of action on their own. Riley-Wilson's character, for example, uses a bow staff, which she said she worked hard to make as real as possible. "I actually broke part of the set on it because I hit and all the lights fell off. I was like 'Rawww!' They were like, 'it's okay, keep going, keep going!'" she explains. "You feel so powerful when you're doing it."

As someone who loved the cartoon when I was a teenager myself, I can't help but have certain ~feelings~ about a live-action remake. After all, the "beep me" line doesn't even make sense anymore! But the three assure me that their new version does justice to the original, from the goofball spirit of the show, down to the sets — they all call out Bueno Nacho, the show's designated hang spot — as a prime example. I guess I'll just have to see for myself.