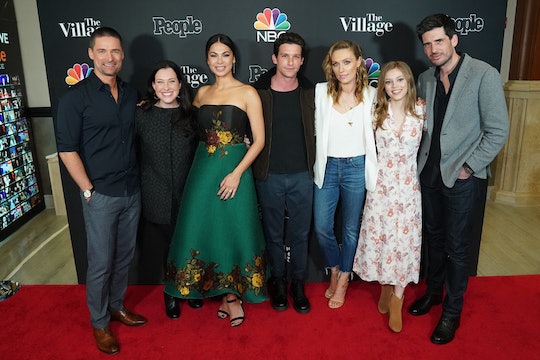 There Are A Few Familiar Reasons To Tune Into 'The Village'

This Is Us is nearing the end of Season 3, which means it's time to introduce its spring replacement. This year, NBC introduces The Village, a drama about the residents of a Brooklyn apartment building who are less like neighbors and more like a family. If you're like me, the trailer for the series drives you bonkers because the entire cast of The Village looks familiar to you. Trust me, they probably are. If can't place where you know them all from, don't worry, I did it for you.

The Village seems to have a This Is Us feel with some New York flavor, and its cast has been on so many other hit shows that if I named them all the rest of this article would just be a list. So, let's talk about their most notable appearances.

Lorraine Toussaint plays Patricia on the show. She's Ron's (Frankie Faison) other half, and together they are described in the NBC press release as the "heart and soul of the building." This is a very stark contrast to one of Toussaint's most popular roles in the past few years as Yvonne 'Vee' Parker in Orange Is The New Black. I probably cheered when Vee's heart stopped beating and I'm pretty sure she had no soul — I mean, what soulful person would mess with Taystee?

Toussaint has kept busy since Vee's death. You may have also seen her in the critically acclaimed movie Selma, Fox's short-lived Rosewood, or on the popular ABC Family/Freeform series The Fosters as Dana Adams. As for her character's counterpart Ron, you've seen Faison play City Police Commissioner Ervin Burrell on The Wire and Jeremiah Easton on The Good Wife. He recently reprised his role as Miranda Bailey's father on Grey's Anatomy, but if indie movies are more your thing you've seen him in Nick & Nora's Infinite Playlist.

Michaela McManus plays Sarah, a single mom and a nurse struggling to raise a "creative teen," according to NBC. This description was a shock to my system, because McManus played Lindsey Strauss on one of my favorite teen dramas, One Tree Hill. Sure, it may have been after the time jump and she had absolutely no shot surviving that weird love square Lucas was in during Season 5, but I can't believe she's now playing the mother of a teenager! You may also recognize her from her role as Grace Karn on Aquarius or Alana Hayes on the short-lived SEAL Team.

Gabe, played by Warren Christie, is a law student on The Village. You might know him as Jude Silva from his role on the first season of the Fox medical drama The Resident or his lead role on the Syfy series Alphas. He's also a veteran of Chicago Fire. Like Christie, Moran Atias also had a recurring role on The Resident, where she played Renata Morali, the head of publicity at Chastain Park Memorial Hospital. I'm excited to see her jump from putting out hospital fires to taking on ICE on The Villiage. Atias plays Ava, who must fight for her American-born son when the government challenges his status.

No matter who you're tuning in for, there's bound to be someone you know on The Village. So, keep the tissue box close to you after This Is Us. I have a feeling you'll still need them.