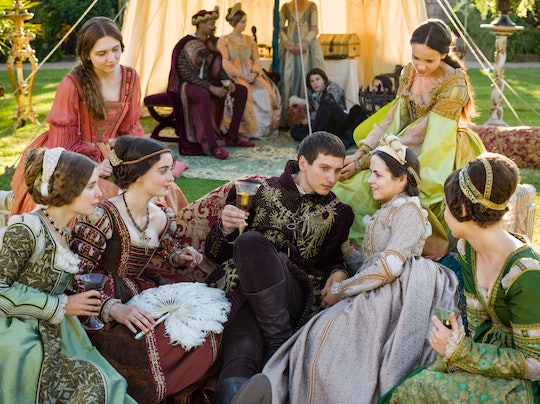 The Cast Of 'The White Princess' Is Full Of TV Powerhouses

Fans of The White Princess are blessed with an astonishing cast. Not only is the ensemble made of experienced actors, but many have appeared on other favorite shows — Game of Thrones being a common one. Given the grand dialogue and complicated storylines (not to mention all the historical drama) this makes sense. While some faces the audience has seen on other cable TV hits, others are completely new. No matter their age, many are already on-screen veterans. Basically, the cast of The White Princess is made up of television powerhouses.

I'll start with the titular character: Elizabeth of York, played by Jodie Comer. While American audiences may not recognize her, British viewers definitely will. She was on shows like My Mat Fat Diary and more recently Thirteen. In fact, Comer just snagged a BAFTA nomination for her performance in the latter. What about her TV husband, Henry VII? He's portrayed by Jacob Collins-Levy. According to showrunner Emma Frost, casting Elizabeth was a lot easier than Henry. "We knew we wanted Jodie right in the very beginning," she said in an interview with Decider. "We struggled so hard to cast Henry." When Collins-Levy sent in an audition tape — with birds chirping in the background, of course — they had him on a flight within days.

Collins-Levy was cast after Frost and her team auditioned 300 men to take on the role of Henry. While he and Elizabeth are key players in the series, they're far from the only ones. Michelle Fairley is one of the Game of Thrones alums; she plays Margaret Beaufort, Henry's mother, similar to her cutthroat Catelyn Stark in Thrones. Another royal mother is also crossing over from the Thrones universe. Essie Davis, who plays Elizabeth Woodville, was Lady Crane on GOT. That's not all: Rebecca Benson, who plays Elizabeth's cousin Margaret Plantagenet, has also appeared on Thrones as Talla Tarly.

Not every cast member was plucked from the GOT roster though. Suki Waterhouse, who portrays Cecily of York, was a model before she pursued acting. Clearly, the range of experience is wide, but the actors come together to pull off a difficult task: to portray real people that lived centuries ago. While The White Princess is a limited series, viewers thankfully have most of the series left to see the cast in action.