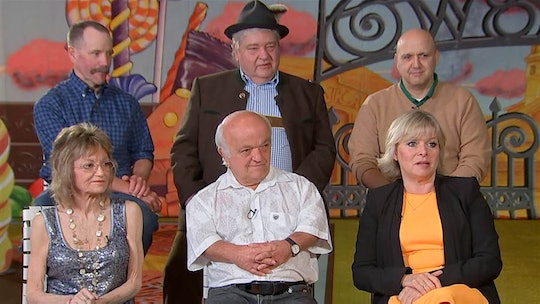 The Cast Of 'Willy Wonka & The Chocolate Factory' Reunites, & Man, Is It Bringing Back All The Memories

There aren't too many movies from our parents' childhoods that we can honestly say impacted our own, but perhaps of that very short list sits this one: Willy Wonka & The Chocolate Factory. And this morning, it all came flooding back when the cast of Willy Wonka & The Chocolate Factory reunited on the Today Show after 44 years to share their memories of the iconic film. Whether you were a fan of the music, the Oompa Loompas, or just the idea of a giant chocolate factory, it’s hard not to be excited about this.

How can anyone us forget the 1971 film adaptation of Roald Dhal's beloved book? (Not to be confused with Tim Burton’s Charlie and the Chocolate Factory, which was, well, different.) Even if you didn’t see it when it first came out, you were eventually granted a look inside the wild world of Willy Wonka. Oh, and the candy. So. much. candy.

Over the years, the movie gained a cult following. After all, it graced a good amount of televisions during that time. And after four decades, we have learned more and more about what happened behind the scenes — like Wilder only accepting the role if he could do a somersault when first meeting the golden ticket recipients and that the famed chocolate river was made of real chocolate that really smelled — which helps keep the fandom alive.

On the Today Show segment, viewers learned a few more tantalizing tidbits that provided a heavy dose of childhood feels. For one Peter Ostrum, the actor who took on the role of Charlie, pretty much stopped acting after that role and became a vet. And Denise Nickerson, who played Violet Beauregarde, only kinda liked gum as a kid and stopped chewing it after her role. But the best news to come out of this reunion is that none of them regret taking part in the movie, which isn't a tune always sung by former child actors.

Whether you secretly wished you would get a golden ticket or dreamt about experiencing a candy-filled world, we all had a favorite moment from Willy Wonka & The Chocolate Factory. Take this time to walk down memory lane and reminisce about them.