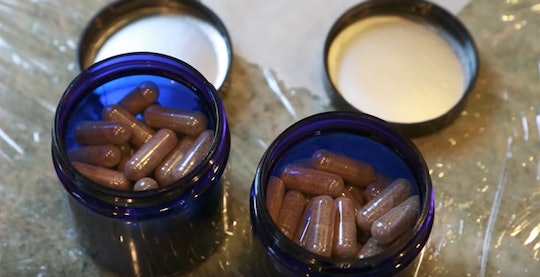 It's no secret moms are often inundated with excessive and conflicting information about how to care for their bodies after giving birth. One increasingly popular suggestion is that mothers eat their placentas post-baby. If you do a quick search on YouTube, you'll find countless videos on the benefits of eating a placenta as well as instructions on how to cook or ingest one. Although the alleged benefits of chowing down on a placenta is understandably alluring (increased energy, decreased risk of postpartum depression, etc.), the CDC recently warned that eating your placenta can be dangerous, especially when it comes to the health of your newborn baby.

For whatever reason, moms are eating their placentas more than ever. The trend has become so popular, in fact, that the Kardashians addressed the topic on multiple episodes of Keeping Up With The Kardashians. In the episodes, both Kourtney Kardashian and Kim Kardashian West sang the praises of placenta pills, which is just one popular way of ingesting the placenta. According to Americanpregnancy.org, "placental encapsulation is the practice of ingesting the placenta after it has been steamed, dehydrated, ground, and placed into pills."

According to People, West claimed the placenta pills helped her to avoid "depression" and also gave her increased energy.

West said, according to People:

I had great results and felt so energized and didn’t have any signs of depression. I definitely had to do it again. Every time I take a pill, I feel a surge of energy and feel really healthy and good. I totally recommend it for anyone considering it!

Although many mommy blogs and parenting websites believe placenta consumption can decrease the risk of postpartum depression, among other benefits, the U.S. Centers for Disease Control and Prevention released a pointed statement warning moms like West to forgo the practice for the sake and safety of their children.

The CDC said in its statement:

No standards exist for processing placenta for consumption ... Consumption of contaminated placenta capsules might have elevated maternal GBS intestinal and skin colonization, facilitating transfer to the infant ... The placenta encapsulation process does not per se eradicate infectious pathogens; thus, placenta capsule ingestion should be avoided.

If you're not a professional doctor, you're probably wondering what "GBS" means. According to the Babycenter.com, GBS stands for group B streptococcus, a kind of bacteria that "many people naturally have in their intestinal tract." About "25 percent of pregnant women carry GBS in the vagina, rectum, or surrounding area," according to the American Pregnancy Association.

Although GBS isn't really dangerous for adults, it can cause life-threatening infections in babies. In some cases, GBS can cause a baby to be still-born. To avoid any complications, moms are usually screened for GBS around the 35th week of their pregnancy, according to the American College of Obstetricians and Gynecologists.

But wait, what does GBS have to do with eating your placenta?

According to a study conducted by the CDC, a mother recently passed on GBS to her baby through placenta pills. Per the report, doctors were confused as to why the baby in question suffered recurring infections of GBS after being treated with antibiotics. To make matters even more curious, the mother's breast milk tested negative for GBS.

Dr. Genevieve Buser, the lead author of the CDC report, said to CNN:

We were concerned because the mother's breast milk had been tested, and it was negative for group B strep. So we were just trying to understand why this child would have two infections in a row. And when we discovered that the placenta had been encapsulated, we asked to test the dried placenta inside the capsules and that came back positive for group B strep.

Although the baby survived the multiple infections and is now doing OK, it's sad that the situation even occurred in the first place, especially since there's no science backing up the benefits of placenta ingestion.

In its report, the CDC reminded parents of this fact when it said:

Placenta ingestion has recently been promoted to postpartum women for its physical and psychological benefits, although scientific evidence to support this is lacking.

In an op-ed for the New York Times, author and mom Nancy Redd described how she ingested placental pills without doing her research. The decision, which Redd believes caused her to get sick for a period of time following the birth of her son, is one she regrets.

While the Internet is teeming with individual pro-placenta stories, they are as anecdotal, and in my case as absurdly off beam, as alien sightings. Eight months later my son and I are fine, but I’m kicking myself for being so gullible without a single shred of proof.

There's no doubt being a mom is stressful, especially when you have multiple people telling you how to take care of your body after giving birth. Although all the information and conflicting opinions can be daunting, one way to sift through mud is to verify claims with proof. Scientific research exists to help mothers and their children, and the CDC's warning against placenta ingestion is just one example of science doing its job.