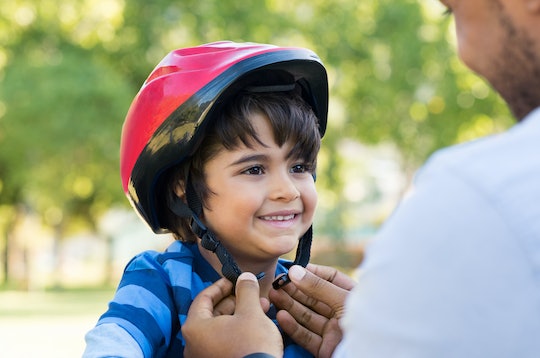 Concussions are one of the more frightening injuries that kids can deal with. As more is understood about the brain and how it works, doctors continue to readdress concussions and their severity. In fact, this week, the Centers for Disease Control and Prevention issued guidelines on how to treat kids' concussions and, according to ABC 7 Eyewitness News, they are the first guidelines the health agency has developed around the issue.

A concussion is defined as the most common and least severe type of traumatic brain injury, according to WebMD. However, that shouldn't be confused with saying that concussions are nothing to worry about. Even if they're among the least severe type, they are still traumatic brain injuries — and they're really common in children. Between 2001 and 2009, the CDC found that about 173,285 people under the age of 19 were treated in hospital emergency rooms for concussions, and those concussions were related to sports or other recreation activities.

The issue has become increasingly pressing as youth sports, like football, continue to grow in popularity. Children's brains are developing, so it's especially important that they receive adequate medical attention and it may need to differ from adults. Luckily, the CDC has finally issued some guidelines, based on some comprehensive studies, as ABC 7 Eyewitness News reported on Wednesday.

On its page detailing the new guidelines, the CDC stated that the goal is "to help healthcare providers take action to improve the health of their patients." It went on to note that the CDC's Pediatric Mild Traumatic Brain Injury (mTBI) Guideline "consists of 19 sets of clinical recommendations that cover diagnosis, prognosis, and management and treatment."

The new guidelines are obviously intended for those working in the medical field, but it's good for everyone to be aware of the changes. For example, the CDC is now recommending against routine X-rays and the use of blood tests to diagnose a mild traumatic brain injury in pediatric patients, according to Fox News, as they may not be entirely effective.

The new guidelines are meant to, according to NBC News affiliate KARE, "reassure parents that most kids' symptoms clear up within one to three months." Those symptoms include headaches, light sensitivity, dizziness, and difficulty sleeping, according to CBS News.

However, more serious symptoms — such as vomiting, severe head pain, and unconsciousness, according to CBS News — require more urgent attention. A doctor may decide, with these new guidelines that these types of symptoms should be looked at via CT scan for diagnosis, according to the CDC.

Although the CDC issued 19 recommendations overall, published in JAMA Pediatrics, the health agency highlighted the following as the key takeaways:

These are some big changes and to really understand them, you need to understand a concussion.

Most people know concussions are often caused by sudden or direct blows to the head, but what exactly happens to the brain in that moment? Remember that your brain is kind of like jello chilling in your skull. Inside of your skull, your brain is cushioned by spinal fluid, as noted by WebMD.

When you sustain a concussion, that means the impact can jolt your brain. In some cases, as the CDC outlined, it can even cause your brain to move around inside of your skull.

One of the important things to note is that a consequence of brain injury is the person often doesn't realize that a brain injury has occurred, according to Traumatic Brain Injury. Signs and symptoms of a concussion can include: confusion, disturbed vision, dizziness, delayed response to questions, and slurred speech, as outlined by Mayo Clinic. Once discussing symptoms with your child, as co-author of the guidelines and CDC brain injury specialist Matthew Breiding, told the Chicago Tribune, parents should encourage their kids to "report any concussion symptoms right away," no matter where it happened.

Concussions are nothing to laugh about, particularly when it comes to children. Hopefully, these guidelines will help children and their caregivers feel more informed and at ease as they navigate recovering from a concussion.