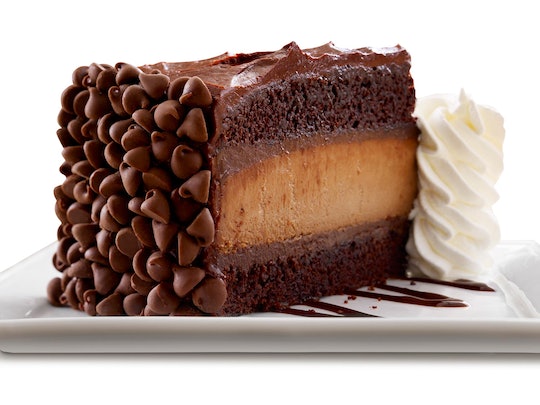 From Monday, October 29th, through Halloween, if you order $30 worth of Cheesecake Factory goodness through the delivery service DoorDash, you can get either a free slice of Reese’s Peanut Butter Chocolate Cake Cheesecake or Hershey’s Chocolate Bar Cheesecake. All you have to do is add the slice to your order and then plug in the promo code “TREATORTREAT” when you're checking out, and you're good to go.

That 30 dollar minimum shouldn't be too hard to hit if you're ordering dinner for a couple of adults or kids. If you've ever been to one before, you know that the Cheesecake Factory's menu is famously and ridiculously huge. It's basically a novel, which makes the restaurant chain the perfect place to order from when you're not quite sure what you want, or when you can't agree on what type of food to order. Craving Italian food? Mexican? Southern comfort food? Yeah, they've got that, and that, and that. Business Insider counted 85 chicken dishes on the Cheesecake Factory menu alone.

People noted that DoorDash delivers in over 300 cities in the United States. The Cheesecake Factory has over 200 locations worldwide, so hopefully your odds of being able to take advantage of this deal are pretty good. If you don't have a Cheesecake Factory in your neck of the woods but you're now craving a slice, check out your nearest Barnes and Noble. The book store's cafe also sells slices from the Cheesecake Factory, but heads up, you'll have to pay for these.

If cheesecake isn't your thing, don't worry: there are other ways to score free or at least deeply discounted goodies for Halloween this year. You can snag a free Krispy Kreme donut if you wear your costume into the shop, according to Food & Wine. A free donut is definitely worth throwing on a witch's hat or some cat ears, in my opinion. It also makes it a perfect time to test out one of their limited-time-only Halloween donuts, which are almost too cute to eat. People noted that Chipotle, Chili's, and Applebee's are among the restaurant offering cheap Halloween food deals, too.

Just be prepared for the sugar rush if you and your kids are taking advantage of any of these sweet deals — Fortune reported that kids eat as much as three cups of sugar on Halloween. That's a pretty massive amount. The American Heart Association recommends kids limit their sugar intake to no more than six teaspoons per day, so Halloween is obviously a huge indulgence. It's a good thing it only comes once a year.