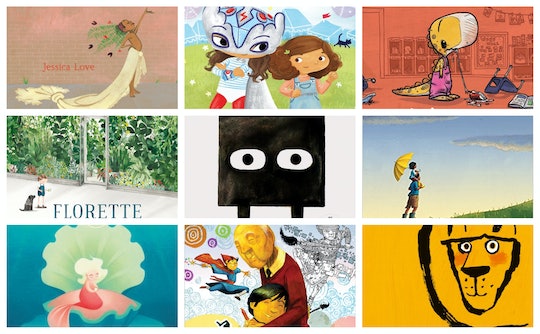 The Picture Books That Defined 2018 & What They Say About Us

Presented in partnership with The Longest Shortest Time podcast.

For a short 24 pages, I sure have no clue how most picture books will end. Truly, if you thought Ulysses was esoteric, let me introduce you Secret Pizza Party, in which a raccoon goes on a dangerous odyssey to score pizza and bring it home to his treehouse. The story makes no sense, and also complete sense: the raccoon's love of pizza is the animating force, start to finish; it is Chekhov's gun on the first spread, and it is the denouement in the last. Picture books don't play by the same rules as other fiction — Jon Klassen explained to Romper that you really only need a motor to get you from one page to the next — which means there is a lot of innovation in any given year. Funny, profound, and weirdly calming, the best picture books of 2018 prove that no one is better at genre-bending than children's books creators.

Outside the cocoon of childhood, 2018 was at times a nightmare, but these books show an interest in empathy, finding beauty in the every day, female empowerment that doesn't come with pre-printed slogans, and touching on the existential (as soon as your kid develops theory of self, they are ready). In short, they were one of the best things about this year. Here are some of the highlights, with a taste of the broader trend.

The Book That Isn't Worried About Labels

The conversation around gender norms and how to raise a boy kicked up a notch this year as #MeToo swept through the grown world, and children's books continued to engage with questions of identity in a playful, sensitive way. Julián Is A Mermaid (Candlewick) by Jessica Love not only capitalized on those of us ordering mermaid tail blankets off Amazon, but offered the confident story of Julián, whose world consists of his abuela and seemingly mermaids — grown women — all around him. Viewed through his eyes, the world is a soft place full of beauty and female energy — along with him, the reader gravitates toward a feminine style of dress, but Love never puts a label on that choice.

Honorable mention: How To Be A Lion (Doubleday Books for Young Readers) by Ed Vere, which gives us a stereotypically un-lion-y lion who is best friends with a duck, and encounters some bullies. Be who you are!

The world of feminist children's book characters is crowded with princesses who hike, who rescue their own prince, and use their STEM skills to invent robot shoes, and I am glad for it, of course, but these efforts often feel heavy handed. Not so, Lucía The Luchadora And The Million Masks (POW! Books) by Cynthia Leonor Garza, and illustrated by Alyssa Bermudez, which focuses on the relationship between Lucía and her little sister Gemma, who wants nothing more than to be like her big sis.

In Lucía The Luchadora, the first book in the series, the main character finds out from her abuela that she comes from a line of superheroes — luchadores — but Garza doesn't get bogged down in supernatural feats or feminist slogans. Her newest book sees Lucía lose her precious lucha libre mask, and wrestle with how it feels to have a little sister who drives you bananas.

Notable mention: Jinx And The Doom Fight Crime (Simon & Schuster/Paula Wiseman Books) by Lisa Manchev, illustrated by Samantha Cotterill, the story of a brother and sister who imagine they are superheroes having adventures in their home.

One of the buzzwords the past year, in which we found out Jake Gyllenhaal practices ASMR, was "empathy." There is a sense that we need to limit sensory input, and create space for kindness and calm. (If it's good enough for Jake Gyllenhaal...) There has been a spate of new children's lit that either aims to educate kids about the importance of empathy overtly, or embodies the kind of calm we want to instill in our children. None did it better than Molly Idle's Pearl (Little, Brown Books for Young Readers), the mere cover of which sends me into a state of peak Alpha waves.

Pearl is given a tiny grain of sand to watch over by her mother, and sinks to the floor of the ocean with disappointment over the smallness of her task. But there, something begins to grow... and grow... and glow. It is the most soothing bedtime book I have ever come across, and my heart rate as I write this is at about 30 beats per minute.

Honorable mentions: The Dreamer by Il Sung Na (Chronicle Books), a softly drawn story about a pig who doesn't mind watching others fly about; Be Kind (Roaring Brook Press) by Pat Zietlow Miller, illustrated by Jen Hill, a favorite for its message; Quiet (Simon & Schuster) by Tomie dePaola, about seeking out space for introspection; The Snowy Nap (G.P. Putnam's Sons Books for Young Readers) by Jan Brett, just the latest snuggly story in her large body of work; and Love (G.P. Putnam's Sons Books for Young Readers) by Matt de la Peña, which is a beautifully humanist story of the ways love touches you from birth through life.

The Book For Little Kafkas

If My Year Of Rest And Relaxation blew up adult lit this year, the latest collaboration between Mac Barnett and Jon Klassen, Square (Candlewick), was the most meta offering yet in any genre.

Square does the same thing every day: he pushes blocks up a hill. That is until, one day. Circle floats by and mistakes one of the blocks for a sculptured self-portrait, then asks for a portrait of herself. Like all of us with imposter syndrome, Square worries that he is not up to the task, wonders why he would even try, seemingly flames out, and yet somehow sculpts something beguiling.

Many children's books have something for mom and dad in them, but the Shape trilogy (Circle is out in 2019 and offers a rip-roaring existential cliffhanger) go worlds beyond their competition. The books are hilarious for kids, and will revisit you late at night in your dreams.

The Book That Is More Emotionally Mature Than You

In children's books, the author and illustrator are often teamed up and managed separately by the publisher, with little contact between the two. The collaboration of Vietnamese-American Minh Lê and Caldecott Medal-winner and Thai-American Dan Santat on Drawn Together (Disney-Hyperion) is a clear exception. The project was deeply meaningful for both the author and illustrator.

A boy is dropped off at his Thai grandfather's house for the day, and the two sit in a world devoid of words for a few pages, silently eating their ramen/hot dog, unable to converse due to a language barrier. But when the boy gets out his markers and starts to draw, the grandfather runs to fetch his ink and brushes. Together, they create a world that allows them to finally meet.

I don't want to bog us all down in sentimentality, but on an artistic and conceptual level it is incredibly executed (SO GORGEOUS), and in terms of story, it is one of the great pieces of art to address the severing of family history through immigration, and the schism between generations.

While I agree that children's books are a great tool for teaching our kids, I gravitate toward books that often teach nothing at all, beyond "reading is a blast," or, say, We Don't Eat Our Classmates" (Disney-Hyperion). You know, helpful koans for every day life.

Ryan T. Higgins, of Mother Bruce fame, is back with another funny story that assumes your kid has a sophisticated sense of humor.

Honorable mention: Interrupting Chicken And The Elephant Of Surprise (Candlewick) by David Ezra Stein, about a chicken who can't let its dad finish a story without beating them to the punch. Solid fun.

The Book That Hypnotized Us

Among devotees of kidlit, there is a tendency to call them "picture books" rather than "children's books" — after all, adults are the ones buying and consuming them. The artwork in many picture books is worthy of being pinned on the wall — and in fact Anna Walker, author of Florette (Clarion Books), has a print of her cover available on her website.

Florette follows a girl who is sad to have moved away from her beloved home and garden to a city (it's Paris) where she stumbles on something almost as good. It is art you can lose yourself in (for a glimpse of her process go here).

Notable mention: Ocean Meets Sky (Simon & Schuster) by Terry Fan and Eric Fan, which, like so many books this year, focuses on a grandparent. Here, a boy's grandfather told his grandson to look for the place where ocean meets sky — the leaping off point for a ridiculously beautifully illustrated journey by the creators of The Night Gardener.

Related post: The Gender Gap In Children's Books Is The Real Monster In The Room

More Like This
What Is RSV?
The Best Halloween Family Pajamas To Match Your Boos
Can Elderberry Help Prevent Illness In Kids? Doctors Weigh In
Tips For Apple Picking With Kids