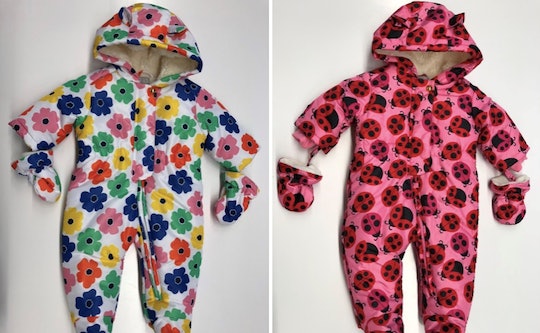 The Children's Place Is Recalling About 15,000 Of These Infant Snowsuits

With winter's official start only a few days away, the cold weather has definitely arrived in many parts of the country, and if you have an infant, it's meant bundling them right up to keep them warm. But parents who have recently purchased a snowsuit for their little ones should take note. This week, The Children's Place issued a recall on these snowsuits due to a choking hazard, according to the U.S. Consumer Product Safety Commission. If you purchased a recalled snowsuit, you will want to make sure to return it for a refund ASAP. Here's how to find out if yours is included in this recall.

Romper's request for further comment regarding the recall from The Children's Place was not immediately returned.

The recall specifically applies to two styles of infant girls’ snowsuits in three different colors that were sold online and at The Children’s Place stores between August and November 2018.

How can you tell for sure if your child's snowsuit is affected? The CPSC has included images of the recalled items to help parents easily identify the product, but if you have a snowsuit that looks similar, you'll also want to double check the style number, which is printed on a label sewn in to the side seam.

Specifically, the recall applies to snowsuits with style numbers 2111187 and 2111188, in the White Sophy floral, Jazzberry ladybug, and Rosebud heart patterns.

Thankfully, no injuries have been reported in connection with the snowsuits, but the possible choking hazard was identified after a report of a metal snap detaching from a snowsuit, suggesting that it could pose a danger to other infants. As a result, the CPSC is recalling all 14,900 snowsuits that were sold in the United States, along with an additional 750 sold in Canada, and is recommending that consumers "immediately take the recalled snowsuits away from children, stop using them and return them to any The Children’s Place store for a full refund."

Those who purchased the recalled snowsuit online are also eligible for a full refund, though CPSC notes that "online customers will receive return instructions by email from The Children’s Place," regarding their orders.

The Children's Place has shared the announcement on its social media channels regarding the recall, and the CPSC has noted that the retailer actually initiated the voluntary recall as part of its "Fast Track Recall" process, which helps to get recall information out to the public as quickly as possible.

Given that only one snowsuit appears to have been reported due to defective buttons, that hopefully means there will not be any other cases, though the only way to be sure is for consumers to return the snowsuits to the store so they cannot pose any potential danger.

Though parents may not always think to take a proactive stance regarding product recalls, it might not be a bad idea to get in the habit of double-checking for recalled items, especially those designed for infants and young children.

In addition to the CPSC, other websites, like SafeKids.org, maintain an ongoing list of recalled children's items (there were 12 new recalls in November alone), and offers parents the opportunity to sign up for bimonthly e-mails listing recall information they may want to be aware of.

Another thing to keep in mind? Given that so many baby items are also often purchased second-hand, it's also a good idea for parents to double-check their gear for any missed older recalls just in case. While the recalls would have ideally been identified by the items' original owners, it can also be easy for products to be unwittingly passed on or sold to others without realizing.

As a parent, it can often feel like there is a never-ending stream of things to worry about, and baby item recalls can only heighten that feeling. But staying on top of recalled items can help prevent injuries, and while it may still be unlikely that your child may end up choking on a snowsuit button, for example, it's always best to err on the side of caution, especially when little ones are involved.