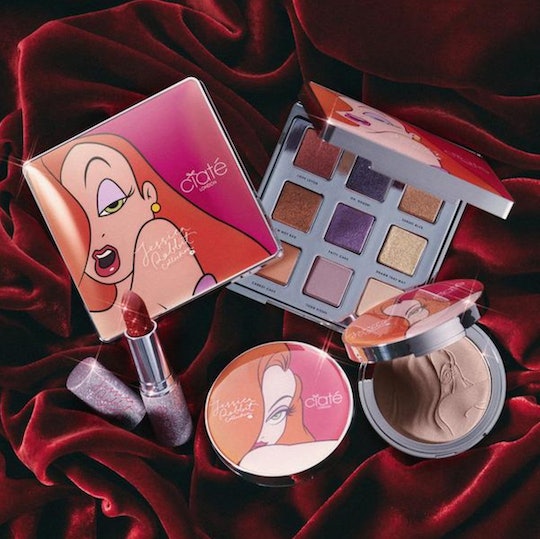 Few cartoon characters have the power to make you want to become a two-dimensional being, but that's not the case when it comes to Jessica Rabbit of Who Framed Roger Rabbit? fame. You, too, can channel Rabbit's intoxicating vibes with Ciaté London's Jessica Rabbit makeup collection; sassy strut not included.

Rabbit became a cultural phenomenon after the release of Who Framed Roger Rabbit? (1988) for her femme fatale looks, as well as the loyalty she displayed for her husband Roger Rabbit throughout the film. Love for the character runs deep 30 years after the film's release, with the Huffington Post reporting that one woman even tried to get plastic surgery to look more like the character back in 2014. And her look defined her character in the live-action animation crossover film, in which she stole the show with her sparkly eyes and full pout. I'm honestly surprised it's taken this long for someone to get the idea for a Jessica Rabbit-inspired makeup line because of how enthusiastic her fans are about her. But Ciaté, a cruelty-free makeup brand based out of London, finally got the bright idea to bring Rabbit to life for makeup and cartoon lovers everywhere with their limited edition three-piece set that launched March 5. And spoiler alert: The three-piece set is already sold out; you can still pick up each of the products individually, but naturally, you'll have fork over a bit more cash.

The collection contains "The Jessica" eyeshadow palette, featuring nine sultry shades you can play with; the "Roger, Darling" glow highlighter that'll give you that animated shine; and the glitter storm lipstick, which is, of course, in Rabbit's iconic famous shade of red. The brand announced the launch in a teaser on their Instagram a week before the collection hit stores, and the internet was abuzz as soon they got a glimpse of the packaging.

Rabbit fans would probably buy the collection for the aesthetic alone based on the love they have for the character, but the pieces inside look like they're worth the buy, too. Check 'em out.

All the eyeshadow hues look like practical colors that people would actually regularly wear (not always the case when you're buying a eyeshadow palette).

And hello, Jessica, within the highlighter compact.

There's clearly some powerful sparkle forces within the lipstick which will make your lips pop even more.

The sparkly sheen to all of the pieces definitely have me excited, and there's something so enticing about having Rabbit on the design. And the hype for the new line wasn't just talk either; both Ciaté and Sephora sold out of the collections within two days of the launch according to the their websites. Jessica Rabbit fans don't mess around.

So while you won't get the discount of buying the whole collection together for $75, you can buy the eyeshadow palette, highlighter, and lipstick individually (unless you want to wait until they restock, which it looks like they will). The eyeshadow palette alone is $39, the lipstick $22, and the highlighter $32 — that's $93 total. It might be worth it if you really need to channel the most alluring cartoon of all time, though. Stay sassy, friends.