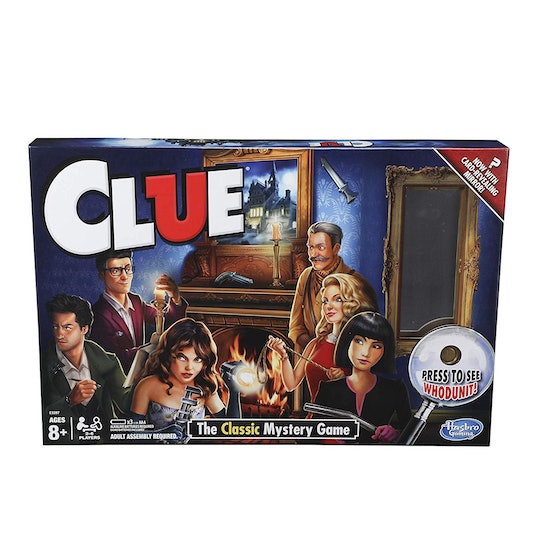 The CLUE Board Game Mansion Is Being Renovated, & You Get To Choose How

Hold on to your lead pipes and make your way to the library, because the game of CLUE mansion is being renovated. For the first time since the game was released, Hasbro is changing things up a bit (and more than just the whodunnit). They are teaming up with online home site, Houzz and allowing users to vote on a room to replace the iconic, but outdated Hall.

Houzz users can vote from Aug. 26 to Sept. 9 between a guest room, a bathroom, a drawing room, and a (new and improved ) hall. The winner will be announced on Oct. 21, with the game being released for purchase this December, and yes, one of the rooms is a shade that could be called (Mrs) Peacock blue. Hasbro is renovating the space in honor of CLUE's 70th anniversary. Debuting in 1949, it has been one of the most popular games in the United States ever since — spawning everything from video games to arguably one of the most-quoted cult films of the 1980s.

"Does the FBI make it a habit of cleaning up after multiple murders?" "Yes, why do you think it's run by a man called Hoover?"

Having been a member of Houzz for years, I can tell you that if you are someone who loves trolling Zillow or Pinterest for hours on end and you've not yet been on Houzz, you're missing out. It's an interior design wormhole, and it's fantastic.

The rooms are certainly an update from the currently stodgy digs in the CLUE mansion. The bathroom is perhaps my favorite — a blue and orange wallpapered maximalist room that oozes luxury without being too full of itself. The accent of floppy poppies in a vase gives it a little bit of silly irreverence, which is essential with such posh fixtures and color scheme. If you've ever been playing CLUE and found yourself wondering, "Why isn't it possible for Miss Scarlet to take her revolver into the loo and off the irritating Wadsworth?" this is your chance to make that fantasy a reality.

The drawing room is very Real Housewives of Orange County chic. The putty interior and red accents scream Tamra Judge in its sparse, modern decor. Although, you're voting for the CLUE mansion here, so there will not likely be any "Drama Free" parties. (Please, please Hasbro, make a Real Housewives Clue.)

It might be that the CLUE mansion is being renovated, and not your own home, but it's easy to think about how these rooms would look in your own house. For instance, this guest room might be over the top and gothic inspired, but there are elements of the room that would work in a lot of different spaces. The color scheme is rich and bold, and the textiles — I could write sonnets about them. The modern rug cast against the old-fashioned furniture and warm wood floors just works. The tray ceiling and gold light fixture make the room feel almost like a cathedral nave, but not cold or distant.

Which is perhaps why I can absolutely imagine Colonel Mustard going after Professor Plum in this space. The only thing I'm not sure of is the weapon. Given the heavy gold drapes, I am going to have to go with the rope. It could be the tie backs of the curtains, and Plum would never see it coming. He totally deserves it with his smoking jacket and smug grin, but, if we're being honest, I'm always rooting for it to be a woman. So unexpected. What is also unexpected is which room will win. It's up to you, so go vote.