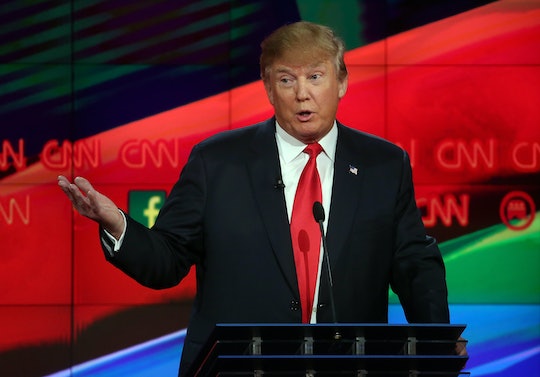 The CNN GOP Debate Saw The Fall Of Donald Trump & It Was Actually Kind Of Sad (OK, Not Really)

Business mogul and Republican frontrunner Donald Trump did not have a good time at the CNN GOP debate Tuesday night. Trump was booed repeatedly during the debate and his fellow candidates even began using his policy proposals to elicit laughs from the crowd. In his closing statement, Texas Sen. Ted Cruz even said, "If I'm elected ... we will build a wall that works. And I'll even get Donald Trump to pay for it," in a sassy nod to Trump's plan to make Mexico pay for a wall along the U.S.-Mexico border. Trump lost the CNN GOP debate, and it wasn't pretty.

Not only did the other candidates repeatedly make fun of Trump, but former Florida Gov. Jeb Bush would barely let him speak at certain times. The two yelled at each other until Bush told Trump, "You're not going to be able to insult your way to the presidency," to loud applause from the crowd, according to Bloomberg.

And that wasn't the only time that Bush tangled with Trump directly. He spoke candidly, to say the least, when the debate focused on Trump's credibility, according to Bloomberg:

Donald is great at the one-liners, but he is a chaos candidate and he'd be a chaos president. He would not be the commander in chief we need to keep our country safe.

Trump's biggest downfall, though, may have come in the attacks he didn't issue. For example, many news sources were predicting that Trump would battle with Cruz because Cruz has risen to second place in recent GOP polls. But Trump didn't attack the candidate and barely engaged with him. At one point, CNN even asked Trump about why he had called Cruz a "maniac" and Trump responded with, "He has a wonderful temperament," while patting Cruz on the shoulder, according to a tweet from The Hill.

And just in case the rest of Trump's performance didn't sink his ship, Kentucky Sen. Rand Paul called him out on his plan to "turn off that Internet thing," according to Bloomberg. Trump reiterated during the debate that he would be open to "closing parts of the Internet" so that terrorist groups would have a harder time publicizing their deeds and attracting recruits, according to TIME. But, come on. Really, Trump? It's the Internet.

Trump's closing statement also wasn't very good. He said if he were elected president, the U.S. would "win again" ('cause we 'Mericans, we love to win, we love to win a lot). He ended the statement by saying that, as president, he would make the country greater than ever before...he just didn't specify just how he would do that, and that will be Trump's perpetual downfall. The CNN GOP debate made it clear that, though Trump can stand his own when it comes to sh*t-talking, he cannot keep up when it comes to the actual, necessary political talking.