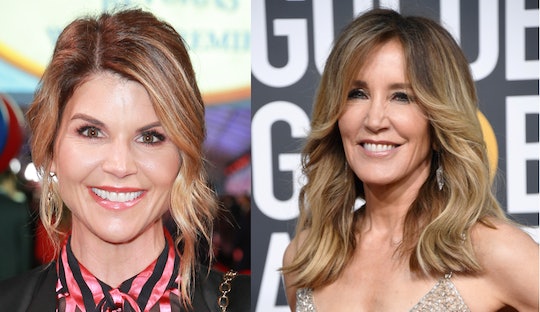 Like many parents, I hope both of my sons will one day attend a "good" university. There's no way I could afford the average cost of tuition at a top school, and I cringe to think of my sons going into debt for the rest of their lives for a piece of paper, but like so many of us who've been force-fed a particular American dream, when I look at my children I can so clearly envision them walking through a beautiful campus on a picturesque day, a stack of books in hand, on their way to securing their future. That vision is what I will put in my sons' heads as I urge them to study hard, work hard, promising them that their hard work and fastidious studies will pay off.

Even if that is a lie.

The recent $25 million college entrance exam cheating scandal, in which 44 people were indicted for allegedly paying and accepting bribes upwards of 1.2 million dollars to help the underachieving children of rich parents gain acceptance to top-tier universities like Yale, Harvard, Stanford, and Wake Forest, has given us the naked truth about what "hard work" gets you. And every single parent should be mad.

Court documents revealed by The New York Times allege that parents paid to create fake student-athlete profiles for their children (going so far as to Photoshop their children's faces on the bodies of actual athletes), bribed coaches and administrators to accept their children as athletic recruits, and bought additional SAT and ACT test-taking time, or paid to have their child's test scores altered. The eight-year-long scheme is being described as a "side door" access to Ivy League schools. But this illegal side door has also illuminated the gilded backdoor access that has always been accessible to the uber-rich; one that awards status over substance, standing over studies, and class over knowledge cultivation.

At any time, through large money donations or legacy connections, the wealthy can obtain access to upper-echelon schools for their children; access their children did not earn on merit alone; access that ensures their children's future success. Even U.S. Attorney Andrew Lelling alluded to a wealthy parent's ability to buy their kid's college education during a press conference on Tuesday. "We're not talking about donating a building so a school is more likely to take your son or daughter," he said. "We're talking about deception or fraud."

In other words, this incredible black market for test scores wasn't necessary. A member of the bourgeoisie made that clear. "Don't cheat the system the illegal way," was the underlying message. "Cheat it the legal way."

A 2018 lawsuit filed against Harvard University uncovered emails proving the school favored candidates that were either "related to or of interest to top donors," as reported by The Harvard Crimson. One student was proving to be difficult, but came from a family who donated $8.7 million to the university. Another candidate received a "boost in the admissions process" because of "an art collection which conceivably could come our way.” Even the current president of the United State's son-in-law, Jared Kushner, reportedly gained acceptance to Harvard only after his father donated 2.5 million to the university, according to USA Today.

Why are wealthy parents willing to pay such an obscene amount of money to essentially purchase their child's education? Because we, as a society, have assigned a higher level of value to these specific schools. Depending on a student's major, graduating from a highly-selective university can mean earning a higher salary in the future, according to one 2016 study, and even guaranteed employment at specific institutions via alumni networks and internships. Five of the current Supreme Court Justices went to Harvard, the other two went to Yale and Columbia. Seven U.S. presidents have degrees from Harvard. William Howard Taft, George H. W. Bush, George W. Bush, Gerald Ford, and Bill Clinton all obtained degrees from Yale. High school seniors and their parents all receive the same message: if you or your child graduate from a top-tier university, success is a foreseeable conclusion.

So the rich capitalize on their wealth to ensure their children have a chance to obtain or maintain positions of power, while the rest of us and our kids struggle to keep up.

But a $50,000 price tag to cheat on the SATs, or a $200,000 bribe to convince a school your kid rowed crew, doesn't just pull back the curtain on the power rich people have to tilt the scale: it implodes the myth that a name-brand degree implies something exceptional about a person. That notion is flawed, at best. Not everyone who is accepted to a good school deserves it, and not everyone who graduates from a good school has earned it. A 2018 study found that "gifted" students from low-income families are less likely to graduate college than "average" students from wealthy families. A degree from a top-tier university doesn't always mean you're capable, but it often means you come from money.

The promise and exclusivity of a "good education" is smoke and mirrors for the oligarchy at play. The notion that the privileged kids who attend fancy colleges are self-made allows the rich to hoard their wealth and power, passing it from generation to generation under the guise of "equal opportunity" and the American dream; pointing the finger at affirmative action as if offering opportunities to the systematically disenfranchised and underserved is the "real" handout. While family dynasties are established and protected, the gap between the richest and the poorest continues to grow.

Even the parents caught using the side door weren't capable of pursuing the backdoor avenues accessed by the wealthiest among us. While their privilege allowed them to bastardize a process already tipped to favor them and their children, in the end they were doing what many of us would at least consider doing if we were honest with ourselves. Our children are less likely to out-earn us, their parents, so we have to ask ourselves what wouldn't we do — how much wouldn't be willing to spend, if we could — to give our kids the best chance to make our American vision of them walking through a beautiful campus a feasible reality.

Then we have to accept the fact that unless we have millions of dollars at our disposal, this vision is just as fraudulent as a photoshopped picture.