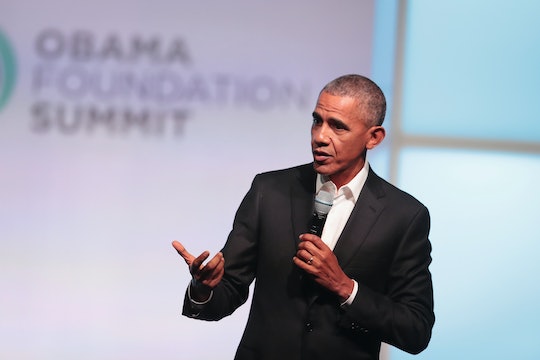 Do you know what I miss? Boy bands. You know what I miss even more than boy bands? President Barack Obama. And clearly I am not alone in this desire, at least going by the "Come Back, Barack" song on SNL. In a hilarious parody of early '90s boy band style, Saturday Night Live, with host Chance the Rapper, sang a heartbreaking ballad that speaks for a lot of the United States right now, begging Barack Obama to come back to the oval office. That is, before they realized that Obama can't come back due to the Constitution and, you know, the very fabric of our government.

The sketch (one of my favorites from this year) opened up like your typical Boys II Men music video. Except in this one the band is called De Von Tré. Chris Redd, Kenan Thompson, and Chance enter the scene in baggy white suits, standing in weird rooms with soft lighting. The song begins as you might expect it to, with all three men taking turns to belt out how sad they are now that their love is gone. Now, they feel like "we're all gonna die." Then the trio launches into the chorus singing, "So come back, Barack," and it is a love song I can totally get behind.

And apparently, I am not the only one who can get behind this jam. Twitter went basically bananas after the sketch. People had a variety of reactions. Some were emotional. Some were almost triumphant. Some really, really, really wanted to know what was going on in Trump's mind if he was watching it. But what everyone could absolutely agree on was that this particular song struck pretty close to home. Perhaps it was so hilarious because it was simultaneously so heartbreaking. Remember what it was like when Barack Obama was our president? Wasn't that nice?

Perhaps no song has more aptly described the general mood of the American people in the year 2017. The lyrics, though simple, are poignant. "2020's looking sad," they croon. "Like super sad, like really sad, like what the hell are we gonna do sad." Seriously though. What are we going to do?

The jam also included a break in the middle, in which Thompson talked over the music in a way that hasn't been done in about 20 years. Maybe artists should start doing this again?

You know it's been a long time, Barack. Almost as long as since a guy talked over a record like this. Why would you leave us? Oh, 'cause you had to? Because of the constitution? But you can come back right? Oh, you can't? 'Cause that would undermine the very institutions that we're barely holding on to as it is? I see. I guess we stuck with this dude for a while then. Maybe you can come back and make a speech. How much would that cost? For real? Oh no we definitely can't afford that. So I'm just getting rained on for nothing. That's interesting. Well you enjoy your retirement, homie.

It has been theorized that the best jokes take something dark and terrible and turn it into something silly and fun. At least in this particular instance, that seems to be the case. Perhaps that's why Saturday Night Live, and the world in general, can't stop making jokes about the Trump presidency. Maybe we are all just laughing to keep from crying right now. In that case, I imagine that the jokes will not stop as long as Trump is in office. And we probably won't stop missing Obama in that time either.