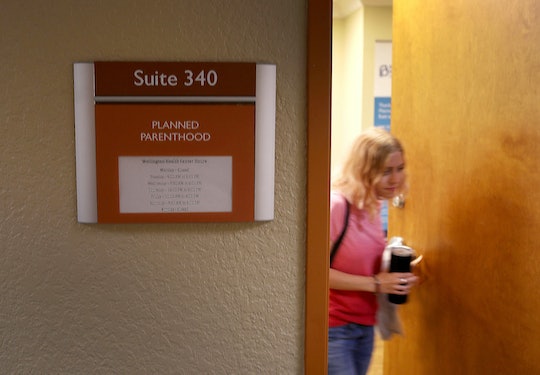 While Roe v. Wade is the law of the land in the United States, all 50 states and the District of Columbia have at least one law restricting abortion access in some manner, whether through gestational limits, waiting periods, or even through prohibiting the use of public funding, according to the Guttmacher Institute. The Hyde Amendment prohibits the use of federal funds for abortions, which in turn informs how abortions can be funded under Medicaid, a joint federal and state program that provides health insurance for low income Americans. But the relationship between Medicaid and abortion access doesn't stop at just the Hyde Amendment, as there is a connection between poor Medicaid policies and anti-abortion laws, too.

Currently, Medicaid covers 72.5 million Americans, according to U.S. Centers for Medicare & Medicaid Services. But Medicaid is not a "one size fits all" health insurance program despite federal involvement: Every state implements Medicaid in different ways. It's up to each state whether to go beyond federal minimum standards. As such, some states do a better job with Medicaid than others. In 2007, non-profit watchdog group Public Citizen issued a comprehensive ranking of state Medicaid programs, using data provided by the Kaiser Family Foundation.

In their rankings, Public Citizen examined eligibility requirements, services covered, service quality, and coverage expansion. Based on these weighted parameters, the 10 states at the bottom of their ranking were found to have the most deficient Medicaid programs. Here they are in alphabetical order, with their ranking in parentheses: Alabama (42nd), Colorado (43rd), Idaho (49th), Indiana (45th), Mississippi (50th and worst), Missouri (41st), Oklahoma (47th), South Carolina (44th), South Dakota (46th), and Texas (48th).

Here's where it gets concerning — and the connection becomes most obvious when you stack all three maps together. According to the Guttmacher Institute, 22 states are extremely hostile to abortion, with another four states listed as hostile. With the exception of Colorado, every state with some of the worst Medicaid rankings also has some of the most hostile and restrictive abortion laws in the country.

So what does this mean, and why does it matter? Between poor Medicaid policies and restrictive anti-abortion laws, women who are at an economic disadvantage are being systematically punished. It's low-income women of color who are disproportionately affected by laws restricting abortion access and funding. In essence, they're being forced to have children they can't otherwise afford. And once their babies are born, there are no reliable safety nets waiting for them, either.