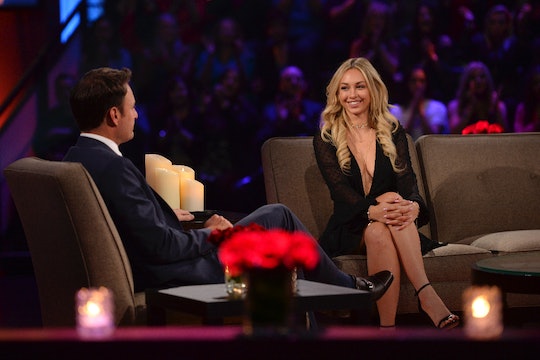 This season of The Bachelor flew by, and we're already down to the final two after Monday night's episode. It's between Raven and Vanessa, but that doesn't mean the other contestants go away quietly. After the rose ceremony came the Women Tell All special, and it did not disappoint. A big part of the event focused on Corinne and Taylor's rivalry, which lasted up until Taylor left this season. When they reunited, the animosity clearly did not go away. The Corinne and Taylor feud on The Bachelor's Women Tell All special prove that they weren't playing it up for the cameras.

Corinne and Taylor's fights seem like they took place forever ago, so let's backtrack. They were never best friends in the mansion, but their relationship took a turn when Corinne went in a bouncy castle with Nick (and possibly brought the bouncy castle?). Taylor wasn't cool with it; that, and the fact that Corinne had a nanny, made Taylor go on and on (and on) about how Corinne had little emotional intelligence. Taylor, a mental health counselor, thought she could read Corinne that way. Corinne was upset that Taylor made these assumptions about her... and as fate — or The Bachelor producers — had it, the two ended up on a two-on-one date together!

Corinne ended up getting the rose that day, and Taylor was sent home. That didn't stop their feud, though, for the two reunited at Women Tell All. Once again, the concept of "emotional intelligence" was brought up. The other contestants stood up for Corinne, for the most part, and said that Taylor was aloof in the house. They asserted that Taylor didn't give Corinne a chance and didn't get to know her, and just made assumptions. They, too, felt that Taylor was cold to them. Corinne was so frustrated by the continued mentions of "emotional intelligence" that she walked out — and returned with champagne.

Taylor became emotional herself, saying that being a mental health counselor wasn't the only part of her identity. After awhile, it was evident that Taylor and Corinne's argument was going in circles, so Chris Harrison put an end to it. Regardless, neither Taylor nor Corinne are still in the running for Nick's heart, which was the reason they were on The Bachelor — not to fight with each other. Taylor and Corinne will likely never become friends, but at least Women Tell All cleared the air... well, some of the air. A little air. Maybe no air at all, but thankfully we'll never hear about Corinne's emotional intelligence again.