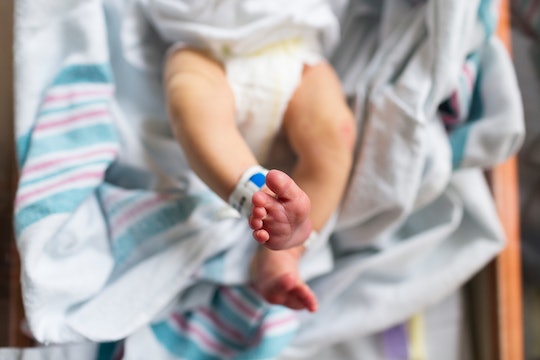 Study Reveals Giving Birth Can Cost Some Families In U.S. $4,500, Even With Insurance

Bringing a baby into the world isn't easy — or cheap. For new parents in the United States, they face some of the heftiest medical bills, even when they're insured. In fact, new research has found that the cost of giving birth in America with employer-sponsored health insurance has increased significantly in recent years.

The new study, published in the January 2020 edition of the journal Health Affairs, looked at more than 650,000 women who delivered babies in the United States between 2008 to 2015, "before and after" the Affordable Care Act was signed into law in 2010. These women were all enrolled in large employer-sponsored health insurance plans that tend to cover more than those purchased by small businesses or individuals. CBS News reported that these kinds of insurance plans cover roughly half of U.S. births.

Michelle Moniz, an assistant professor in obstetrics and gynecology at the University of Michigan and the study's lead author tells Romper that her own work led her to investigate the financial challenges faced by new mothers. "I unfortunately sometimes see patients delaying or deferring recommended services because of the cost," Moniz says.

"Our findings suggest that many patients face significant financial burdens for maternity care," Moniz explains via email. "We saw that patients paid, on average, $4,500, even with insurance!"

Researchers found that high childbirth costs remain despite the changes put into effect with the Affordable Care Act, wherein insurance provided by employers must cover maternity services. But even with these protections, the researchers explained to Newsweek that insurance companies "pass on certain costs" to patients via co-payments and deductibles.

The study's overall findings were something of a shock for Moniz and her team. "I was very surprised at the sheer magnitude of the costs for patients," she says. "$4,500 is not a small, $10 copay. These are significant financial burdens. What's more, these costs are coming at a time when many families are trying to prepare for a new baby — they are buying a car seat, a crib, a high chair, baby clothes." Indeed, those purchases quickly add up; as a 2015 report published by the USDA states, the average cost of caring for a child during their first year of life is nearly $13,000.

And the expenses don't stop there. "The women in this study were all working, so we imagine that many would be planning for childcare costs when they returned to work," Moniz explains. Daycare is another significant cost incurred by new parents; according to the National Association of Child Care Resource & Referral Agencies, the average cost of daycare attendance in the United States is $11,666 per year — or $972 a month — but with prices ranging from $3,582 to $18,773 a year — between $300 and $1,564 monthly.

"Our findings concern me," Moniz says, "because I don't want to see women not getting recommended services because of costs."

It's important to keep in mind that the insured women included in this study would be considered the lucky ones. Childbirth costs vary from state to state, but without insurance those numbers can go as high as $32,000, according to The Guardian. As Moniz pointed out, the financial constraints are even tighter when these costs are unexpected.

"Most Americans have very little money set aside for an unexpected healthcare costs. 45% of pregnancies in the U.S. are unplanned," she says. "For many women, the costs we noted in this study were not expected, which magnifies their impact." For these reasons and more, Moniz and her team are calling for change in the way the U.S. manages birth.

"The U.S. is the only high-income country with a rising maternal mortality rate — all our peer countries have declining maternal mortality rates. I would hate to see these costs preventing people from getting care that improves maternal and child health outcomes in this country," Moniz says. "We need policies that reduce or eliminate patients' out-of-pocket costs for maternity care. These are essential health services that every family should be able to access, without going into debt."

More Like This
Mom Gives Birth To Record-Breaking 16-Pound Baby
Does The FDA's Plan To Limit Lead In Baby Food Go Far Enough?
Covid Vaccine “Deserts” For Kids Under 5 Make It Almost Impossible For Parents To Find Shots
A Parent’s Guide To Stomach Pain In Kids
What Parents Are Talking About — Delivered Straight To Your Inbox