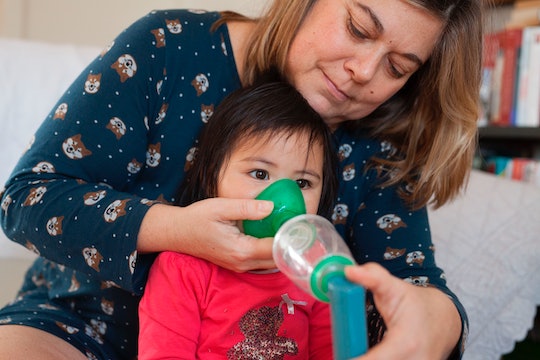 Photo by: BSIP/UIG via Getty Images

The Cost Of Prescription Medicine Is A Threat To My Son, & Many Other Children

For families like mine, the rising cost of prescription drugs is already a crisis. My 6-year-old son Joseph has a genetic condition that causes significant hearing loss and respiratory problems. With severe asthma, Joseph depends on an inhaler to stay healthy and strong. Without that inhaler, he wouldn’t be able to play soccer, hockey or every boy’s favorite game — ninja warrior.

As a mom of two young sons, it doesn’t take long for the bills to add up. There’s the cost of speech therapy and co-pays for regular appointments with the doctor, on top of our rent and other standard living expenses. Like so many families across the country, our budget doesn’t have much wiggle room.

But the cost of Joseph’s inhaler has been rising steadily over the years, up to $219 per month and sometimes even more for the albuterol inhalers he uses for rescue. And of course, we can’t just have one inhaler. We need at least one at home, one to keep with the school nurse, and one for his soccer and hockey teams. Depending on how badly Joseph’s respiratory problems are flaring up, his inhalers only last a couple months. The total yearly cost for inhalers alone ends up being $1050 — money that would go a long way toward our other expenses.

For others with chronic health conditions, prices for needed medications can cost thousands of dollars.

We don’t need Congressional hearings to understand why medication prices have skyrocketed for families like mine: just look at drug company profits.

While President Trump has said that lowering drug prices is one of his top priorities, his proposals mainly tinker within the existing broken system. They do nothing to stop drug companies from setting any price they want for medicines.

There’s simply no excuse for jacking up drug prices — especially when it leaves children, seniors, and families unable to afford life-saving medication.

While some of Trump’s proposals might help seniors in Medicare, they don’t address rising costs for the over 150 million people with private insurance or the millions that have no insurance at all. PhRMA, the prescription drug lobby that spent over $22 million in 2018 to stop meaningful price-controls in their industry, according to filings reported by Stat, actually praised the president’s proposals.

That’s because the small steps proposed by the Trump administration fall far short of the urgent action that Americans need to stop drug companies from gouging us for life-saving medicine. Much of that medicine is developed with research paid for by our tax dollars, but ultimately put out of reach because of our patent system, which allows a prescription drug company to have exclusive rights to sell a drug for several years without any competition, forcing patients to pay whatever the company decides — or be priced out.

No one should have to choose between paying their mortgage or buying groceries and affording the life-saving medication they need. No one should have to ration their prescriptions against their doctor’s recommended doses so they can afford groceries and the light bill. But prescription drug companies are forcing millions to make those choices every day while raking in billions in profits each year.

And thanks to President Trump’s tax plan, the ten biggest drug companies are enjoying a $6 billion tax break this year. That’s on top of $76 billion in taxes they’ll save by offshoring profits. With profits and tax breaks like that, there’s simply no excuse for jacking up drug prices — especially when it leaves children, seniors, and families unable to afford life-saving medication.

This shouldn’t be a political issue. My son’s health, and the lives of countless Americans, hang in the balance.

Instead of empty promises and theatrical hearings, we need substantive action to ensure that everyone can afford to follow their doctor’s orders and get the medications they need. Thankfully, my senators, Senator Maggie Hassan and Senator Jeanne Shaheen, made lowering drug prices a top priority when they introduced the Empowering Medicare Seniors to Negotiate Drug Prices Act earlier this year. Congress should follow their lead and fight for comprehensive legislation that pulls back the curtain on drug prices and puts power back in the hands of patients.

At a time of deep divisions, Americans across the political spectrum are united around the need to lower prescription drug prices. We are rallying around elected leaders who show a true commitment to action because we believe no one should have to choose between life-saving medication and paying the rent.

Now it’s time for those who represent us in Congress to act. My son and millions of families like mine are depending on you.