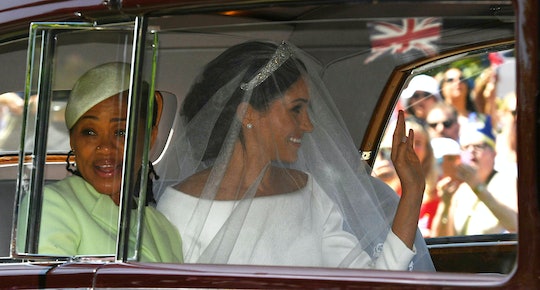 The lead-up to any wedding is stressful, but Meghan Markle certainly had more than her fair share of pre-wedding drama. With her father's health issues and paparazzi photo scandal, the poor bride had to deal with one family crisis after another leading up to her big day. But even though she had the dashing Prince Charles, Prince of Wales walk her down the aisle, there were more than a few major ways Meghan Markle honored her family at the royal wedding today.

One of the most touching moments of the royal wedding was the car ride that Meghan and her mom, Doria Ragland, shared from the Cliveden House Hotel en route to St George's Chapel. The stunning mother and daughter duo made history as they waved to the cheering crowds from inside the Rolls-Royce Phantom IV. Ragland wore a beautiful pale green dress and day coat by Oscar de la Renta, along with a chic green fascinator by Stephen Jones, according to People. She also wore an elegant diamond nose ring that solidified her status as coolest mother-of-the-bride in royal history!

It was clear from watching the mother-daughter ride to the chapel that it was a very tender moment for both of them. But that wasn't the only way Meghan paid tribute to her family.