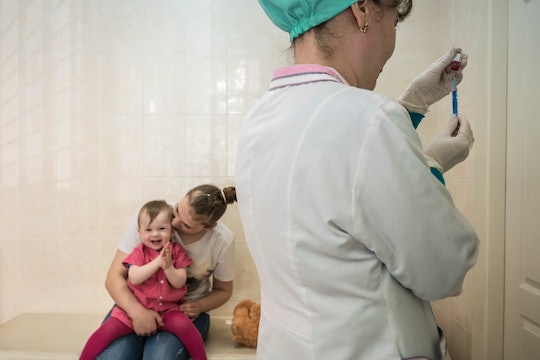 Talk about some unwelcome and scary news for your week: In spite of hopes that warmer weather would slow down this virus, an outbreak of a dangerous childhood illness is hitting the country hard. With 24 states affected, the country's measles outbreak is growing, up to an estimated 880 cases — and one state has been hit the hardest.

As the New York Times reported, there is a new tally of measles cases this year so far, and it's the highest numbers since back in 1994. With 41 more cases reported last week, according to the Centers for Disease Control and Prevention, the total is now 880 cases for 2019 alone.

While almost half of all states were affected, New York appears to top the charts with 30 of last week's 41 cases alone coming from the Empire State, the Times added. CNBC noted that New York City was the location for 21 new measles cases, with nearby Rockland County contributing at least nine of the diagnoses.

The website added that health officials attribute the surge in the illness — which can include a fever, runny nose, cough, sore throat and the infamous rash — to an increase in parents who refuse to vaccinate their offspring. This is in spite of the fact that some old fears about vaccination (such as the theory that it causes autism) have been disproven, CNBC reported.

The Times noted that in New York State, the condition has largely been found in Orthodox Jewish communities.

As detailed by the Washington Post, anti-vaccination messages have caught on in Orthodox communities, including anti-vaxxer Del Bigtree of the Informed Consent Action Network, who claims the government is covering up a link between the vaccine and autism, despite research studies with hundreds of thousands of young participants concluding that there is no link.

The Post added there has been a similar rise in cases in other tight-knit communities, including those of Somali descent living in Minnesota.

The Pacific Northwest has been another geographic area bit hard by the measles, The Times noted. Vashon Island, Wash., a small town a mere ferry ride away from Seattle that's known for a so-called "hippie" ethic, as the New York Post noted, maintains one of the lowest vaccine rates in the U.S.

Fortunately, vaccination rates among kindergartners in the area's public schools rose to about 74 percent in 2018 from 56 percent in 2012, The Times detailed. Still below the 95 percent rate needed to keep measles from spreading widely if brought into a community.

Keep in mind that while the increase in cases really does sound alarming, the CDC's hope is that virus transmission will slow down again, as rates did in January, The Times chimed in. CNBC noted that in 2000, the disease had been declared completely eliminated in the U.S.

Yikes. We just have to keep on educating people regarding the proven science behind childhood vaccinations, especially within smaller communities, where there may be pressure to subscribe to certain beliefs because your neighbors or town leaders do. I have to hope that education on this topic will win out.