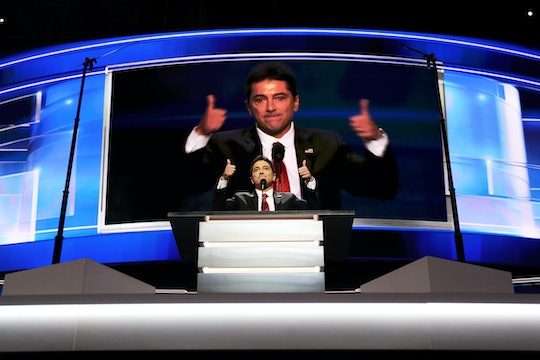 The Craziest Quotes From Day 1 Of The RNC

Political conventions are all about giving politicians and party members a chance to run their mouths and pay lip service to the candidate and party platforms. But with Donald Trump headlining the convention this year, the convention was bound to get interesting. Some of the craziest quotes from day one of the RNC will either make you roll your eyes or LOL, depending on how you feel about the issues. On Monday night, speakers like Scott Baio, Antonio Sabato Jr., David Clarke, and others all gave speeches about some of the GOP's main issues this year.

It was, of course, a lot of bashing of Democratic presumptive nominee Hillary Clinton, but there was also a lot of talk about national security and immigration as well. Early in the night, Scott Baio, of Happy Days fame, pretty much summed up the mood of the evening when he said, "let's make America, America again." If you listened and believed the RNC speakers, you'd think America was a real dump. And I know we have our issues (a lot of them) but it's no so bad, right? Donald Trump supporters would not agree, it seems. There are still a few more days of the convention, so surely there will be even crazier things said in Cleveland, but these are some good ones.

Of course, you could go on for ages collecting crazy quotes from the Republican convention. There were certain things that got the crowd riled up over and over again. Like former New York City mayor Rudy Giuliani talking about "Islamic extremism" was one of the highlights. Giuliani was probably Trump's best spokesperson from the evening, telling the crowd that when he was mayor and police officers were in danger, Trump tried to "help," anonymously.

As the day went on, the crowd got a little more rowdy with each speaker. Overall though, it was a pretty quiet event. At one point, Code Pink protestors managed to enter the convention hall and hold banners saying that "we can end war," but she was surrounded by people and silenced but allowed to stay in the arena. Other women were spotted throughout the night hanging out in the empty seats of the hall, making it look like the organizers were just happy to fill seats.

Aside from the Hillary Clinton bashing, talk about securing borders from illegal immigrants, and speeches about how Donald Trump will be the man to make America great again, the evening was pretty tame. It could have been a lot worse, but then we still have four more days.