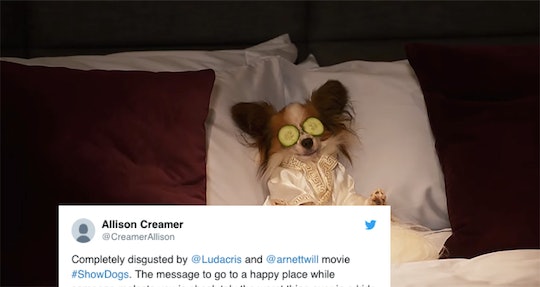 The 'Show Dogs' Creators Have Responded To Intense Criticism From Parents

Now that temperatures are on the rise and schools across the country are winding down, a lot of parents are heading off to the movie theaters with their kids. And one of the movies parents are thinking about taking their kids to is Show Dogs — a PG-rated movie that follows an undercover police dog who teams up with an FBI agent to save a stolen baby panda from animal smugglers. Although the movie's plot seems innocent enough, Show Dogs is stirring up a bit of controversy among parents. As for why parents are upset about the movie Show Dogs, the answer centers around two scenes that some parents say promote a disturbing message about sexual abuse. The stakeholders behind the film, however, argue that the scenes aren't ill-intentioned.

Just a few days after Show Dogs celebrated its May 18 release date, some parents took to Twitter to express concern about two particular scenes in the movie. The first scene in question features the movie's main character, Max (voiced by Ludacris), a talking dog who must infiltrate a high-end dog show to save the stolen baby panda. In order for Max to succeed in his mission, he must look and play the part of a show dog — a task that requires extensive grooming. Unsurprisingly, all of the pageant primping is uncomfortable for rough and tumble Max, especially when he is told by FBI agent Frank (Will Arnett) that the final part of the competition process includes a genitals inspection. To get Max ready for this moment, Frank touches his genitals — a move that he clearly doesn't like. Although Max expresses his discomfort, he is told by the former dog show champion to go to his "Zen Place" to get through it, according to Entertainment Weekly.

The next scene shows Max on the final day of the competition, when he is to have his genitals inspected. Although Max doesn't want to do this, he must go through with the inspection if he wants to save the baby panda. Viewers then watch Max as he goes to his "zen place" — a world that includes fireworks and flowers — as his genitals are touched, according to iHeartRadio.

Following news of the scenes, many parents took to Twitter to claim that movie promotes a troubling message about grooming kids for sexual abuse. Essentially, some people believe the movie normalizes common grooming tactics (go to your zen or happy place type of commentary), while others are upset that Max's success in the movie hinges on him tolerating inappropriate touching — a plot point that could signal to kids that sexual abuse is OK when it justifies an end. When you consider these compelling points, it's understandable why some parents are a bit concerned about Show Dogs.

Of course, it's *highly* unlikely that the people behind Show Dogs — intended for the scenes to promote or normalize sexual abuse. Global Road Entertainment, the movie's production company, said as much in an email statement to Romper:

Responding to concerns raised by moviegoers and some specific organizations, Global Road Entertainment has decided to remove two scenes from the film SHOW DOGS that some have deemed not appropriate for children. The company takes these matters very seriously and remains committed to providing quality entertainment for the intended audiences based on the film’s rating. We apologize to anybody who feels the original version of SHOW DOGS sent an inappropriate message. The revised version of the film will be available for viewing nationwide starting this weekend.

Despite the production company's apology, many people continue to express frustration with the scenes.

"Y'all should pull the movie Show Dogs from theaters. It features grooming the main character (and in turn, the kids who watch this) to accept sexual molestation," one person wrote, according to Twitter. "NOT OKAY for a kids movie!!"

"Completely disgusted by @Ludacris and @arnettwill movie #ShowDogs," another commenter chimed in. "The message to go to a happy place while someone molests you is absolutely the worst thing ever in a kids movie. You 2 should be ashamed of yourselves."

Dawn Hawkins, the Executive Director of the National Center on Sexual Exploitation, said about the scenes in a statement published to the NCOSE's website:

The movie Show Dogs sends a troubling message that grooms children for sexual abuse. It contains multiple scenes where a dog character must have its private parts inspected, in the course of which the dog is uncomfortable and wants to stop but is told to go to a ‘zen place.’ The dog is rewarded with advancing to the final round of the dog show after passing this barrier. Disturbingly, these are similar tactics child abusers use when grooming children—telling them to pretend they are somewhere else, and that they will get a reward for withstanding their discomfort. Children’s movies must be held to a higher standard, and must teach children bodily autonomy, the ability to say ‘no’ and safety, not confusing messages endorsing unwanted genital touching. The National Center on Sexual Exploitation calls on Global Road Entertainment, the distribution company, to halt the distribution of Show Dogs in movie theaters and to recut the movie so that it no longer contains such unsafe themes.

It's also important to note here that one of film's main writers, Max Botkin, agrees with many of the parents' sentiments. "I absolutely condemn any suggestion or act of non-consensual touching in any form, as well as disassociation as a coping mechanism for abuse of any kind," Botkin said about the controversy, according to CNN. "I understand and empathize with the parents' and groups' concerns regarding the message the movie may impart." Botkin also claims he didn't participate in the final rewrites of the film.

Although it's not exactly clear what happened here, there's a good chance this controversy boils down to a lack of oversight as opposed to malice. It's also worth noting that Global Road Entertainment respects parents' right to express concern.

At the end of the day, parents have the right to choose which movies their children see. And it goes without saying that every parent has the right to share concerns about movie scenes they find uncomfortable or troubling. But whether you agree with the backlash or not, most can agree this controversy brings up important points about children's movies. For starters, writers and stakeholders need to carefully review each scene before it reaches the final stages of production. Parents and kids deserve this type of thorough consideration.

Additionally, it might be a good idea for parents to educate themselves on the best ways to address troubling movie scenes with kids. Some people might use Show Dogs as a jumping off point to discuss sexual abuse and inappropriate touching with their children, for example. "If children have seen this scene, I would remind them (frequently) that private parts are just that — private. Any body part that lives under a bathing suit should be guarded carefully," Titania Jordan, Chief Parenting Officer of Bark, an internet safety solution to keep kids and teens safe online, tells Romper in an email. Additionally, Jordan recommends:

But most importantly, this debate is another example of how parents and movie execs can work together to create the best content for children.