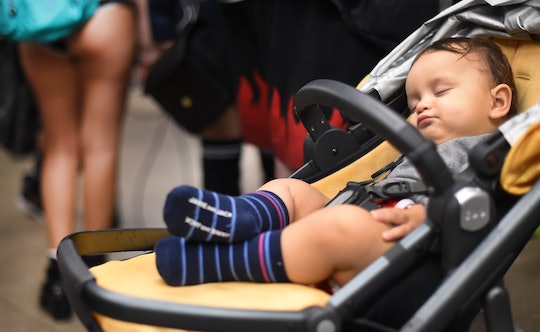 The "Cry It Out" Sleep Method Isn't Harmful To Kids, New Study Confirms

When my daughter was just a few months old, my husband and I Googled the phrase “sleep training.” We read about the “no tears approach.” We studied Karp’s method and Fading’s method, but despite the fact that I wanted to be attached — despite the fact that I wanted to coddle and comfort her — we decided to try the “cry it out” technique. (And dear God, there were a lot of tears; there was a lot of crying, not only from her crib, but from me — because I felt heartless and cold. I felt like I was doing irreparable harm.) The good news is that researchers now believe the “cry it out” method does not harm children. In fact, according to a new study, crying it out does not cause children to develop emotional, behavioral, or parental attachment problems and, in short, crying won’t do any long-term damage.

The study, which came out of Flinders University in Australia, tested both the cry it out method and another commonly used sleep method on a group of 43 infants. Both methods effectively helped the babies fall asleep; however, according to the study's lead author, Michael Gradisar, not only did the cry it out method help children get to sleep, it helped them to stay asleep, according to USA Today.

Both treatments helped the babies fall asleep quicker. However graduated extinction [aka the “cry it out” method] was better in reducing the number of times the infants woke during the night, as well as the amount of time they spent awake during the night.

What’s more, the cry it out approach did not stress the infants any more than the "gentler" method, and Gradisar believes that is because both parents and their babies are less likely to fall into "a coercive behavior trap," or a pattern in which babies are rewarded for their cries, according to USA Today:

This is especially true if the parent responds quickly after the child cried. The result being the child is more likely to cry more often thus disrupting the sleep of both themselves and their parents.

For those who do not know what the “cry it out” method is, it is basically a sleep training approach that, according to BabyCenter, encourages parents to put their child to bed awake and then let them cry for short periods of time. After a specific period has passed, parents can enter the room and comfort their child; however, they should not pick them up and, after a few moments, they should leave the room, wait several more minutes, and then start the entire process again.

(As a mama whose done this, I can tell you waiting is the worst, but after a few days, the outbursts died down. I was going in her room less, and she was going to sleep sooner each evening.)

It is important to note this is not the first study of its kind. In 2012, a similar infant sleep study was published by the American Academy of Pediatrics, and it found that, not only did children whose parents let them cry it not experience any detrimental short-term effects, they also did not show the effects of any long-term negative impacts five years later. Both babies and parents can rest a little easier — even if they both shed a couple of tears first.