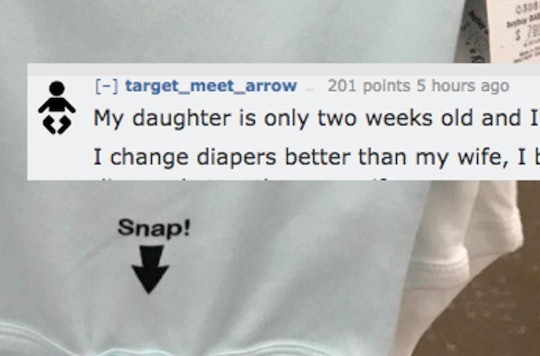 The Dads Of Reddit Are Seriously Pissed About This Onesie, & They Have Every Right To Be

In a lot of ways, modern fatherhood is a lot different from what it used to look like for previous generations. While my grandfather never changed a diaper, and wasn't even in the room when his children were born, my husband — like many millennial dads — has played as active and involved a role in our children's lives as I have, right from the beginning. That's really important, and it's absolutely about time that the value of fatherhood is recognized, but unfortunately, the tired old trope of the clueless dad still lingers. Case in point? The dads of Reddit are pissed about this onesie, and honestly, you can't blame them. Although snarky onesies are awesome (and, let's be honest, totally one of the best aspects of dressing a tiny human), whoever made these unfortunate shirts definitely needs to get a clue.

The subreddit for dads — aptly named Daddit — is an online community of nearly 70,000 people filling all kinds of fatherly roles, and is a place to share cute kid photos, swap parenting stories, and ask for advice. One thing that Daddit makes pretty clear? These men are far from being "babysitters." And they weren't exactly impressed with a photo of a onesie that was trying to make a lame joke at their expense. The pic, uploaded by Daddit user newdad216, showed a tiny onesie with arrows labelling where the child's head and arms would go, with another arrow pointing at the buttons and the instructions, "snap!" Front and center on the onesie were the words "This shirt is Daddy-proof," because apparently it's cute to suggest that the father of your baby is a total idiot.

Unsurprisingly, the dads of Daddit were super unimpressed. Newdad216 captioned the pic, "Just have to say, f*ck clothes like this," and it wasn't long until other users chimed in. As user MashedPotatoh noted, the lame onesie just reinforced what he called "the dumb dad stereotype," which "makes simple things like taking your kid to the park or cooking them dinner, seem like an impossible task." And judging by the thread, it sounds like the effects of that stereotype go far beyond baby clothes.

If there's ever been any doubt that moms are automatically assumed to be the default parent, the Daddit thread was full of crystal clear examples. As user SuperSheep3000 wrote,

Yep. Was in a supermarket today and the cashier said 'aw is daddy looking after you today?' I smiled, politely, cause [I'm] British but all I wanted to say was 'b*tch, this is my child. I do that everyday, all day.'

So f*cking tired of being called a babysitter. I'm tired of being at the playground and being asked if I'm 'watching' the kids. And f*ck those shirts.

Getting treated like a less-important parent has to be infuriating, but the notion that dads are inferior isn't just ignorant, it's also actually damaging — for dads, their partners, and their children. As user eccentricfather pointed out,

[It's] not so much that we're thought of as babysitters, but as overgrown children ourselves. Thinking that we are barely capable of caring for ourselves, let alone our own children. The thing is, this creates such an imbalanced dynamic. It makes men feel incompetent, so they don't try (or use it as an excuse not to help). And it makes women expect little help or support when it comes to parenting, resulting in frustration over the long haul because they feel like they're shouldering most of the burden. I can't believe in 2017, we're still having this conversation.

It's not just conjecture though: research has proven that encouraging dads to be involved and confident parents is so important. According to The Huffington Post, father-infant bonding can "[reduce] cognitive delay, promotes weight gain in preterm infants, and improves breastfeeding rates," and according to BBC News, children of dads who are confident in their roles and involved in their lives are "less likely to suffer behavioral problems in their pre-teen years."

In other words, kids lose out when dads continue to be portrayed as clueless, or even when they're just assumed to do less care-taking compared to mom. And that doesn't even take into account that, in many families, dads really are the primary or sole caretakers. Assuming that a man caring for his kid must be "giving mom a break" or doing something out of the ordinary isn't just sexist, it's straight up insulting.

Granted, some of the Reddit commenters felt that the onesie was little more than a lame joke, but really, it seems way past time that these jokes and comments end. Because even if it is meant to be funny and harmless, it reinforces ideas that actually do have an influence on how we view fathers' contributions to their children and families.

There's no doubt that parenting matters, and the more that fatherhood can be valued and embraced, the better. But sexist onesies and well-intentioned comments about babysitting undermine dads as being just as worthwhile to their kids as moms. And that's a really outdated notion that doesn't benefit anyone.