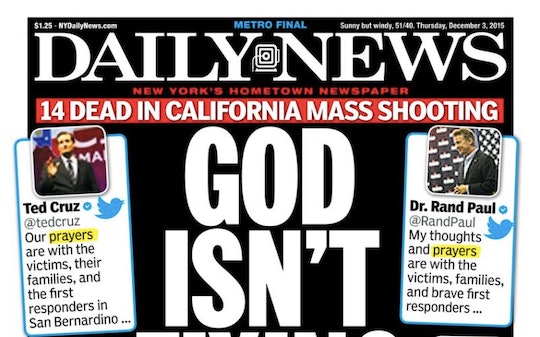 On Wednesday afternoon, a shooting took place at the Inland Regional Center in San Bernardino, California. Three suspected gunmen (one of whom was a woman, reports indicate), opened fire at the IRC, and officials note that upwards of 14 people were killed, at least 21 others wounded. Police apprehended two of the suspected shooters following the Inland Regional Center shooting, killing both on scene during a police pursuit. (Update: Police identified the two suspects killed in the shoot-out as Syed Farook and Tashfeen Malik, a couple. Farook was a U.S. citizen and reportedly a San Bernardino County Department Of Health Employee.) It's still unclear whether or not a third suspect, detained on the scene, was arrested in connection with the shooting. In the wake of the shooting, the conversation once again turned to gun violence, and while many have their own two cents to contribute to the conversation, the New York Daily News, perhaps, said it best. On their December 3 cover, the Daily News said "God isn't fixing this," and to be totally honest, maybe that's the wake-up call Republicans needs to hear.

It's still completely mind-boggling to think that an individual (or, in this case, individuals) would target a facility that offers services for individuals with developmental disabilities, but it's happened. Just like it seemed completely ludicrous that an someone would target an elementary school, or a movie theater, or a Planned Parenthood facility the day after Thanksgiving. Yet here we are, again and again and again. The New York Daily News cover takes immediate issue with the banality in which politicians resort to commemorating mass shootings in our country: instead of offering tangible, fixable ways to enforce stricter gun-owning policies, often times politicians resort instead to faith, sending continued prayers for the victims and their families. Though there's nothing wrong with leaning on your faith as a stronghold in times of incredible sadness, the Daily News sheds light on political figures' inability to offer their constituents anything concrete: Prayers can't be measured, prayers offer no hard-and-fast data, and "prayers answered" lie in the eyes of the faithful, not the faithless.

Yes, prayers are welcomed, but are they enough?

What the Daily News offers instead is a rebuke on what politicians — and in this case, Republican presidential hopefuls — have traditionally done. In less than a week (the Planned Parenthood shooting that left three dead and many others wounded took place less than seven days ago), mass shootings in America have totaled upwards of 20 dead. That's 20 lives lost. Twenty parents, 20 friends, 20 partners, 20 daughters, sons, sisters, brothers, loved ones; 20 prayers that, in the eyes of the New York Daily News, God didn't answer. How do you explain that to families mourning the impossibly impossible loss of a family member?

Regardless of your politician affiliation, think about the ways politicians market a brighter, safer America to voters. Are prayers enough to earn your vote, or are tangible, measurable goals what matters? It isn't about casting away your religious preference — you're absolutely entitled to your faith and your religious beliefs — but when you think about the world that you want to live in, is it measured in vague prayers or clear, definite, concrete plans?

There's nothing wrong with being religious or in believing that prayers matter and have weight and value. Depending on your faith system, they absolutely do, and it's important to help in crisis situations however feels most valuable to you, personally. If praying is how you contribute, then by all means, do it. But don't let it be the barometer by which you measure political success. Don't let it be the gauge by which you rate our elected officials. Prayers are important — as are donations, increased visibility, conversation — but they're not the only thing politicians, namely Republicans, can do.

Elected figures (and those running for office) are in the supremely unique position of having their voices heard. They have a platform they're standing on. A platform of voters. They have the ability to incite change. Imagine what good could come to the world if the likes of Donald Trump and Ted Cruz advocated for stricter gun policies that made it more difficult for un-qualified gun owners to obtain gun licenses. The Daily News is not asking Republicans to give up their party's ideals.

They're just asking them to do more with the platforms they have.

The New York Daily News brings to the surface an ugly, ugly truth. It's one that we don't want to face. It's one that maybe we don't want to admit. Yes, prayers are welcomed, but are they enough? No one is suggesting you eschew religion, and no one is launching a War on Religion in the wake of the December 2 attacks, but when you think about the families who will have to do without this year — who will do without despite the fact that this could have been prevented — do you really want dance around the issues in vague ambiguities? Do you really want to "hope" prayers are enough, or do you want concrete policies that effect change? When the time comes, do you want to vote for leaders who'll do something, or do you hope to elect officials who are better served praying for something?

As the Daily News notes, I don't think we have a choice anymore.