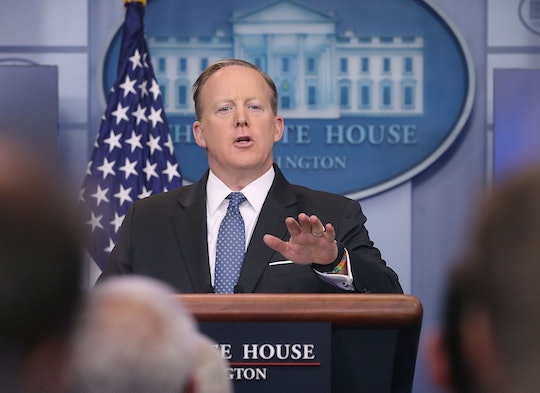 'The Daily Show' Added Kids To A Sean Spicer Briefing

Sean Spicer has a unique way of speaking to the press, to put it gently. An observer might even get the impression that he feels he's above them. Need an illustration? You're in luck, because The Daily Show edited kids into Spicer's briefing, and once you watch him condescending to a bunch of kindergarteners, you'll never see him the same way again. Before watching, you know it'll work — the man recently named checked patty-cake, for goodness' sake — but you'll be shocked at how utterly seamless it is. It's honestly more believable than real life, because the way he talks to adults is absurd.

For illustrative purposes, before watching the video, guess which of these statements Spicer has actually said to a reporter during a briefing, and which ones I made up:

We're gonna raise our hands like big boys and girls.

One at a time.

You're gonna have to take no for an answer.

It's not your press briefing.

Can you stop interrupting other people?

You don't get to just yell out questions.

Think you've got it? Watch the video to find out!

If you're unable to watch it right now, I'll clue you in: he actually said all of those things! To grown adults! In a professional setting! Yep, it's not just April Ryan who gets treated like a child by Spicer, it's actually everybody (although, to be fair, she seemed to get the worst of it). But did The Daily Show staff just cull every single press briefing to find the handful of interactions that actually fit with that scene? Nope! Let's play again, and this time, I promise I'll really add some fake ones in there. What has Sean Spicer actually said to a journalist at the White House?

You keep your mouth shut.

It's Monday, so I brought a special guest.

That was very nice of you.

Hold on, you’re going to wait your turn.

Do you hear me? Sit down!

You guys better be careful.

Ready for the truth? All but three of those quotes are actually from Spicer. "You keep your mouth shut," "Come on, stop whining," and "Do you hear me? Sit down!" are from Billy Madison, Kindergarten Cop, and Dead Poets Society, respectively. But that doesn't mean Spicer won't say them to a reporter in the future. Stay strong, White House press corps.