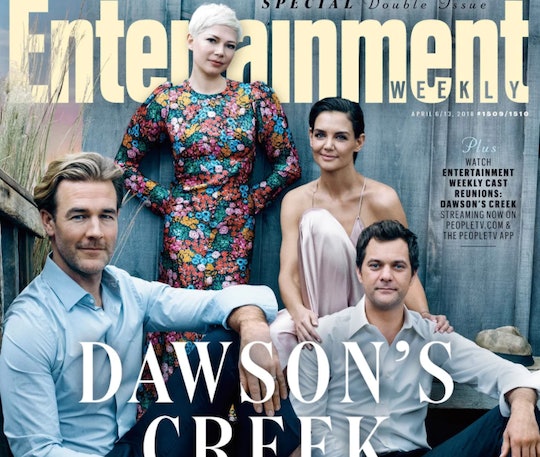 If you spent your teenage years shipping Joey and Pacey before shipping was even a thing then brace yourself, because on Wednesday the Dawson's Creek cast reunited for the show's 20th anniversary in an Entertainment Weekly cover story. In addition to posing together for a seriously swoony group cover shot, the show's original four stars — James Van Der Beek, Katie Holmes, Michelle Williams, and Joshua Jackson — each appeared solo on their own special edition cover. And while it might be hard to even accept that the show itself is two decades old, seeing the cast back together all these years later is definitely bringing all the feels for fans.

Given that television reboots have become hugely popular in recent years, many formerly-teenaged Dawson's Creek fans have long pined for Capeside's finest to return to the small screen. That doesn't appear to be happening, but their magazine cover reunion is the first time they've ever appeared together since the show's 2003 finale, according to Entertainment Weekly, and that's a huge deal. But best of all, it wasn't even just the original foursome who came back: Busy Phillips, Kerr Smith, Meredith Monroe, and even Mary Beth Peil (aka Jen Lindley's beloved "Grams") made a return for the cover story interview, and spoke about what it was like to work on the iconic '90s show.

If, like me, you spent your formative years in love with the show and vowing that you would never recover if Dawson and Joey actually ended up together in the end, then the cover alone is probably enough to give you palpitations. Though she may have ultimately become better known to tabloid audiences as a result of her marriage to Tom Cruise years three years after wrapping her role on the show, Katie Holmes is once again returning to her rightful place among her Dawson's Creek co-stars — and I'd like to think that the fact that she also happens to be lovingly touching Joshua Jackson's shoulders in the pic means that somewhere in an alternate TV universe, the two are still living happily ever after.

In the sit-down interview, the stars reflected on the show's legacy, and the enduring love so many people seem to have for it so many years later. Williams — who is now a four-time Oscar-nominated film actress, as well as a single mom to her 12-year-old daughter, Matilda — told Entertainment Weekly that there is definitely something special about being part of a show that connected with so many young people. She said,

I loved that we were able to get in there in those formative years for people. That’s why people, I think, are so connected to it. When something affects you while you were growing up, it kind of stays in there forever. When you’re so permeable and open and trying to figure out who you are and what’s going on, whatever reaches you in those moments really becomes part of you.

The show's actual popularity did come as a bit of a shock to James Van Der Beek though. In a video clip of the cast's sit-down interview, he admitted that while he thought the script and the casting was totally solid, he had no idea that the show was "going to blow up in the way that it did" — and Jackson then chimed in to joke that they were really just excited about "being employed."

But just in case you thought it might be possible to get through this without shedding a tear, Monroe shared that, actually, they really were as tight-knit a bunch as they seemed. She said,

I was so grateful that [the show] was shooting in Wilmington. We all got to connect in a way that I don't think we would have if we'd been in New York or L.A., and I felt like it was a family. I truly loved everybody, and we had fun.

The full, nearly-hour-long interview is currently available to stream on PeopleTV, but from the sounds of it, the fact that the reunion even occurred in the first place has been enough to make people freak out on social media. For one, it has meant that Dawson's Creek has finally becoming a trending topic on Twitter:

And it's caused a lot of old memories to resurface:

Though many have also realized that, now that 20 years have past, re-watching the show and seeing the stars together once again feels a bit different than they may have expected:

But if nothing else will come of all this, it's pretty safe to say we'll likely all have the show's theme song stuck in our heads for the rest of eternity:

In other words? The Dawson's Creek reunion is basically everything we didn't even know we desperately needed in our lives. And for that, this former '90s kid is very grateful.