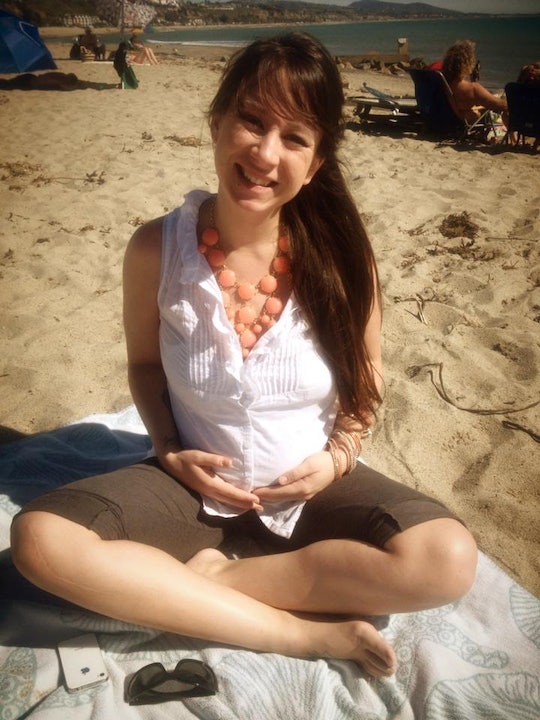 The Day I Found Out I Was No Longer Having Twins

It's been almost two years, but I will never forget the day my son died. You'd think a day like that — the day you lose the life within you — will be a different kind of day — a day that looks and feels nothing like the ones that came before. A day unlike anything else. But the truth is that the day I lost one of my twin sons was a day like any other. I woke up feeling nauseas, threw up, took a shower, threw up again, then had something to eat accompanied by a full bottle of water and a few more rounds of nausea. I was rushing out the door, my nervous partner dragging an over-packed suitcase behind me, already late for an early-morning flight to Southern California. My twin pregnancy made the rainy, grey, and melancholy days of Seattle much more pleasant than they actually are, but I was off to say goodbye to my brother before he deployed and went to war.

The trip to California marked the first time my partner and I would be separated since we found out we were pregnant with twins, and the anxiety was palpable. My overprotective, worrisome partner didn’t want me so far away, and my constant assurance that nothing could possibly go wrong did nothing but feed, nurture, and grow his unforgiving pessimism. I was happy. Nervous, but happy. I wanted to see my mom, hug my brother goodbye, and give him the opportunity to meet his (albeit heirloom tomato-sized) twin nephews. I boarded the plane at 19 weeks pregnant with next-to-no hassle, having had time to adjust to my growing pregnant stomach and learn how to successfully navigate my surroundings without bumping into everyone and everything. A young woman sat to my right, probably in her early 20s. An older woman sat on my left, more than happy to ask me questions about my due date, my pregnancy cravings, my sons’ potential names, and to tell me how excited she was when her daughter announced her pregnancy. Our conversation was easy, and reminded me of the beautiful way a pregnancy brings even relative strangers together.

But then things changed. I started to feel dangerously nauseous as a wave of heat enveloped my entire body. I had trouble focusing on the seat in front of me. I was lightheaded and dizzy even though I wasn’t standing. I felt myself swaying in my seat. Then everything went black. Just as quickly as things started, I woke up.

According to my seat mates — the 20-something seated beside me and the older woman I'd swapped stories with — I had passed out and convulsed for no more than a few moments, but long enough for the two women on either side of me to call out for help. I opened my eyes to a sympathetic male flight attendant, smiling ear to ear as he comforted me, but I could read the panic painted all over his face. He calmly explained what had happened, that they'd told the pilot, and they were preparing an ambulance to take me to the hospital the moment we landed. I was offered water and crackers while a neonatal nurse switched seats with the courteous soon-to-be grandmother to my right. She took my temperature, then my pulse, and then she listened for my sons' fetal heartbeats.

I waited until the ultrasound tech left the room, but the brief look she shared with her assistant was all I needed to confirm what I already knew. She, of course, would have to wait for a doctor to tell me, but I saw the still body of a once kicking and hiccuping heirloom tomato-shaped growing baby, and I knew. I had lost him.

The next few moments were a blur of questions. I told the nurse everything I could about my medical history, shared a few light-hearted laughs with the people around me, and passed along a lot of apologizes in response to the weighted stares of strangers as I exited the plane. Everyone stayed in their seats as EMTs escorted me to a wheelchair, took my vitals, and asked me more questions as they rolled me forward towards the ambulance. Before departing the airplane, I made sure to thank the women seated on either side of me and the nurse who came to my aid. I was panicked and embarrassed; I still didn't know what was wrong and I still didn't know if my twins were OK, but the kindness shown to me by relative strangers was something I could never overlook. So, I wiped tears from my slightly-blushing cheeks and thanked the flight attendants, especially the sympathetic man who was so calm when he could have been (and probably was) so scared.

My brother, my mother, and my partner were informed of the emergency situation mid-flight by the flight crew. My brother was waiting for me at the airport and we took off to the nearest hospital. In the car ride over I threw up again and again, all the while shaking in my seat. I feared the worst, remembering with sheer terror that the nurse on the flight couldn't find my boys' heartbeats. At the hospital I talked to my partner on the phone, determined to hide my devastated panic behind light-hearted jokes. I told him, “Well, you told me so!” hoping that his desire to be “right” would cancel out the number of miles between us and the relentless fear choking us both. Hearing his voice on the other end of the receiver soothed me, but nothing could save me from the dread tightening around my neck.

His words of encouragement were hopeful attempts to shield me from the inevitable pain to come. But there wasn’t a single syllable that could save me from the doctor pulling up a chair to the side of my bed, looking down at his hands and feet, and telling me that one of my sons had died.

At the hospital the nurses gave me an IV as they drew blood. When they took me for an ultrasound, I finally felt something that resembled relief. Not only would I be able to see my babies and finally know they were OK, but my brother was going to see his nephews for the first time, too.

One twin was kicking and moving and had a healthy heartbeat. The other twin had no heartbeat at all; his small body — displayed in fuzzy black and white — stayed still and lifeless. I bit my lip and swallowed a very real scream and forced my tears to hide behind my already smeared eyeliner. I waited until the ultrasound tech left the room, but the brief look she shared with her assistant was all I needed to confirm what I now knew. She, of course, would have to wait for a doctor to tell me, but I saw the still body of a once kicking and hiccuping heirloom tomato-shaped growing baby, and I knew. I had lost him.

I whispered to my brother that something was wrong, and he quickly assured me everything was OK. “Wait for the doctor,” he said, followed by, “Don’t worry until you have to." His words of encouragement were hopeful attempts to shield me from the inevitable pain to come. But there wasn’t a single syllable that could save me from the doctor pulling up a chair to the side of my bed, looking down at his hands and feet, and telling me that one of my sons had died.

It was also the day I was forced to learn how to forgive myself, because the guilt you feel after losing a baby is overwhelming and relentless and dangerous.

I learned that the flight, or anything that happened on the flight, did not contribute to the loss of one of my twin sons. In fact, he probably died a few days — if not a week — before, judging by the size of his already diminished body. The moment my son's heart stopped beating, his body stopped growing, and was already shrinking in size as my body was starting to absorb his nutrients and shrink his placenta. The position of the deceased twin, my remaining twin and my organs, coupled with the way I was sitting on the plane, probably constricted a vital artery, causing me to pass out. They had answers for everything that happened to me that day, but they couldn't give me a reason why one of my twin sons had died.

So, even though that day started out like every other day, I'll likely never know if it was or wasn’t the exact day I lost my son. Instead, it was simply the day I realized he was already gone. I had to call my partner and tell him that we'd lost a son. It was the day I heard him cry for the first time and I could do nothing but sit there, a listening ear on the end of the call, unable to comfort him. It was the day I realized I was carrying life and death inside of me at the same time. It was the day a doctor told me that I'd eventually have to birth to a baby who would take an actual breath and another who never would. And while I'll never learn what caused the death of my child, it was also the day I was forced to learn how to forgive myself, because the guilt you feel after losing a baby is overwhelming and relentless and dangerous.

There hasn't been a single day since — even now, two years later — where I haven't asked myself if I could have done something different. Am I responsible? Did I cause this loss to happen? Did I eat something wrong or sleep in the wrong position or walk when I should have rested? Was I not qualified enough to be the mother of twins, and did the universe do what it felt it needed to? Those questions can bury you in self-hatred, until all you can see is your undeniable flaws. Because the day I actually lost my son was a day just like any other day. But unlike all the hundred that have happened since that day, it's a day — an hour, a minute, a feeling — I won't ever be able to forget.